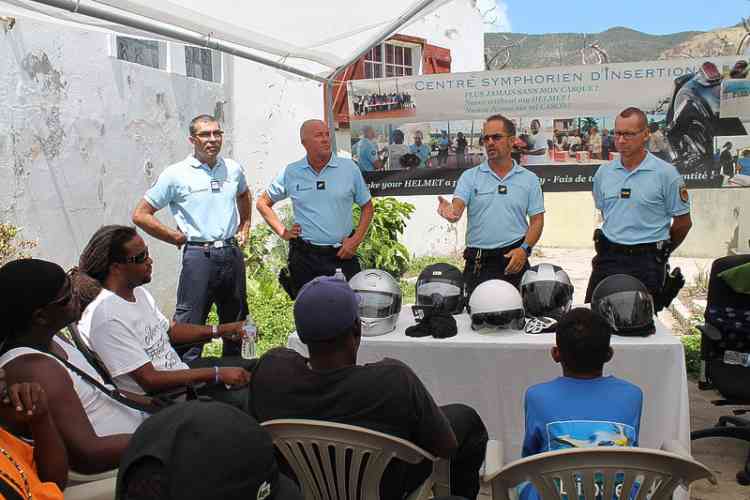 Gendarmes talk to young adults about the importance of wearing helmets and gloves during an awareness session in French Quarter on road safety. (Photo Robert Luckock)

A young man tries on a helmet as Gendarmes, CSI President Marie-Paule Rousseau-Cornette and various partners in the road safety initiative look on. (photo Robert Luckock)

MARIGOT–Association Centre Symphorien d’Insertion (CSI), organized in collaboration with the Gendarmerie and Lt. Colonel Sébastien Manzoni, another road safety session in French Quarter on Thursday to benefit the youth, putting emphasis on the proper wearing of crash helmets and gloves for motorbike and scooter riders.

CSI has been organizing this project on security and helmets, part of the Politique de la Ville, since 2015. CSI donates two free helmets a month to young adults.

“It’s important and more meaningful to have real exchanges between the population, young people, and the Gendarmerie about the reality of driving on the roads, and the dangers you face when you are not adequately protected,” said CSI President Marie-Paule Rousseau-Cornette. “Remember, if you are critically injured from an accident and disabled for life, this also has a devastating effect on your family.”

Among the Gendarmes present were Commandant Dauboeuf of the road safety unit in Guadeloupe, Gendarmes of the motorized brigade in St. Martin (BMO) and Territorial Police Chief Albert Connor and his team.

Gendarmes talked about the typical scenarios that lead to accidents on the roads and the consequences of those accidents. The young people present took part in the question-and- answer session. The morning concluded with the distribution of free helmets.

CSI thanked Suki Shop, French Quarter, and Jeff Jhangiani for the beverages, Karl, a partner for the helmets and Richie Beauperthuy for the tent and chairs.