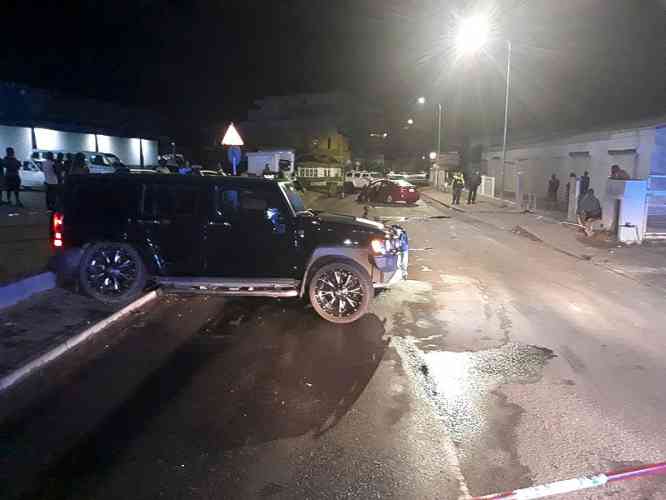 COLE BAY–Two vehicles were involved in a collision on Welfare Road at approximately 2:20am Sunday. The driver of a black Hummer was coming from Simpson Bay and attempted to filter into the road to Cole Bay but a red Elantra lost control and slammed head-on into the black Hummer.

None of the passengers or drivers sustained any injuries during the accident, but things got ugly when a police officer was the first to arrive on scene.
According to the driver of the Hummer, who was in shock after the accident took place, the officer drew his weapon and placed his firearm in the driver’s mouth, threatening to use it if the driver did not calm down.
After a heated argument between the driver and the policeman, the officer placed the gun back in his holster when other officers arrived to respond to the accident.
Family members and passengers intervened during the police and accident victim’s exchange and the situation was brought under control by other officers in charge.
The driver of the red vehicle informed police that the driver of the black Hummer was very aggressive towards him.
The driver of the black Hummer and his father were asked to come to the police station in Philipsburg to answer some questions about the incident. On arrival they both were arrested for threatening the police officer in question along with the other driver involved in the accident.
They remain in police custody while the incident is being investigated.
At least four passengers who were in the black Hummer are upset about the incident and questioned whether the officer had the right to draw his weapon on an unarmed resident.
The Daily Herald contacted the police over the weekend for comment, but the Public Relations Office had no statement up to press time.