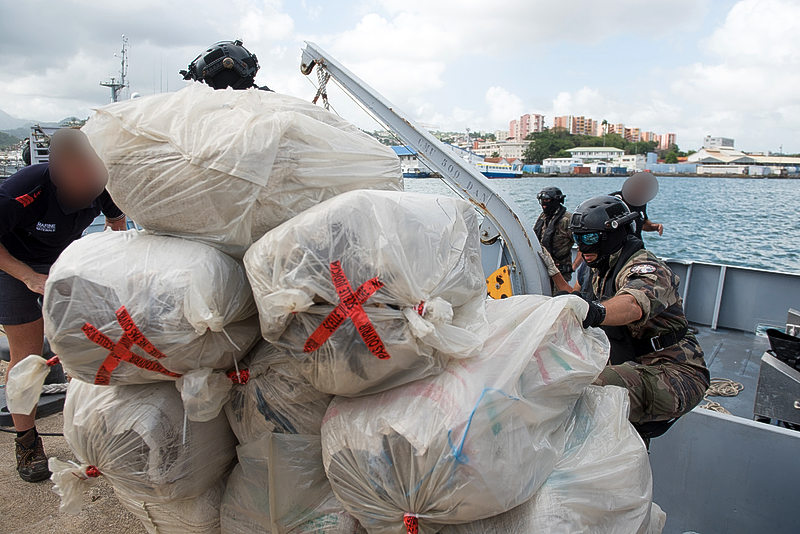 MARIGOT–The Armed Forces of the West Indies disclosed it seized some 1,000kg of marijuana during five coordinated inter-island narcotics operations that took place in the space of eight days under the authority of the Préfet of Martinique, Fabrice Rigoulet-Roze.

In total some 15 suspects were handed over to judicial authorities. During the night of May 8, 2017, the surveillance frigate Germinal stopped a go-fast boat about 15 miles from St. Lucia suspected of drug trafficking.

The operation was initiated based on information transmitted by the Office Central de Repression du Traffic Illicite de Stupéfiants (OCRTIS). The Panther helicopter deployed by the frigate located the go-fast boat which attempted to dispose of the bales of marijuana.

However, a total of 556kg was recovered. Two traffickers were immediately arrested and the drugs confiscated, pending a decision by the Prosecutor of the Republic in charge of specialised inter-regional jurisdiction to destroy the drugs.

In addition to the interception on May 8, the frigate Germinal led two successive operations at sea on May 1 and May 4, 2017, seizing 103 kg and then 99 kg of marijuana. This last action was carried out with the assistance of maritime patrol aircraft C26 of the Regional Security System (RSS) based in Barbados which helped the Dominica authorities apprehend three suspects for drug trafficking.

Two other operations were also carried out under French tactical coordination via the Operational Center of the Armed Forces in the West Indies FAA.

The first operation took place on May 4 involving American, French and St. Lucian authorities which led to the rejection and recovery of 12 bundles of drugs and subsequent apprehension of three suspects on their arrival in St. Lucia on a go-fast boat.

The second operation took place during the night of May 8 off the coast of Martinique. The patrol vessel of the U.S. Coast Guard (USCG) Donald Horsleysupported by a DASH 8 aircraft of the Joint Inter Agency Task Force – South (JIATFS), arrested seven suspected drug traffickers and seized 260 kg of marijuana.

The tally of these operations targeting the inter-island traffic has resulted in the seizure of more than 1,000 kg of marijuana and resulted in 15 suspects being handed over to judicial authorities, thus contributing effectively to the fight led by France against crime organized in small Caribbean islands and particularly in Guadeloupe and Martinique.