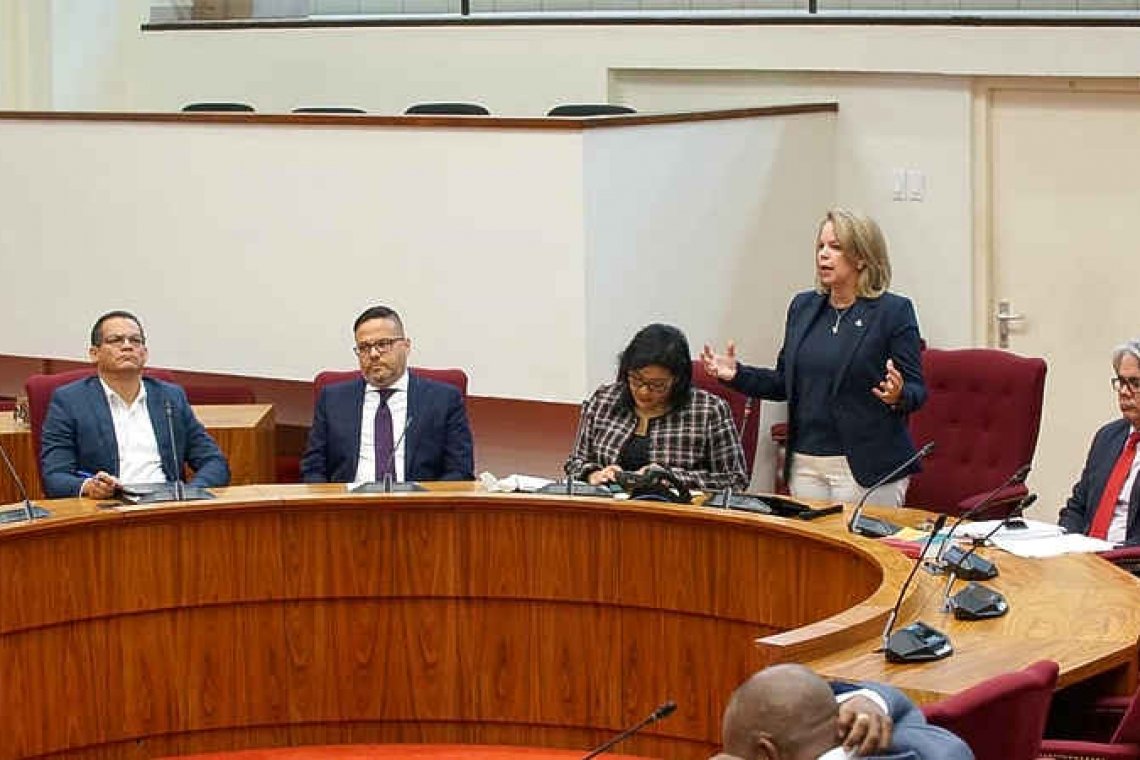 Aruba Prime Minister Wever-Croes (standing) addresses the Parliament during a recent meeting, with next to her several members of the Council of Ministers. (Aruba government photo)

THE HAGUE/ORANJESTAD–Aruba Prime Minister Evelyn Wever-Croes wrote an angry letter to her Dutch colleague Mark Rutte in which she drew the comparison between the forceful conditions of the Dutch government and the choke holds of George Floyd and Mitch Henriquez. “Mark, we can’t breathe like this.”

According to Wever-Croes, the Dutch government is guilty of the same behaviour that it always accuses Aruba, Curaçao and St. Maarten of by sending a secured 218-page document four days before a meeting of the Kingdom Council of Ministers, demanding that the islands give their approval up front without consent of their parliaments.

“The Netherlands has always demanded of the Caribbean countries that they showed adult behaviour, stick to the general principles of good governance and hold up their own pants. It seems that Aruba has become the country version of the American George Floyd and our own Mitch Henriquez,” stated Wever-Croes.    The Aruba prime minister was highly critical of the condition to one-sidedly establish a new entity that will decide on future funding and spending. “This treatment is a gross violation of the democratic norms and values on which this Kingdom rests. The democracy and autonomy of the Caribbean countries is hollowed out by creating a new entity which will dictate policy and finances without any democratic control of the Caribbean countries.”

According to Wever-Croes, the words of philosopher Friedrich Nietzsche become applicable: “Whoever fights monsters, should see to it that in the process he does not become a monster.”

She stated that the people are not being helped, but pushed into a ravine, together with the democratic norms and values of the Kingdom.

Wever-Croes said that the new conditions tied to the third liquidity tranche are going “too far and is emergency excess.” She said that Aruba, “as the only Caribbean country which handled things in an adult manner was now being punished” by being forced into joining the Kingdom Consensus Law Financial Supervision RFT that already applies to Curaçao and St. Maarten since 2010.

“This was done wilfully, founded on the fact that Aruba has complied with all loan conditions from the first to the third liquidity support tranches,” stated Wever-Croes, who noted that the financial supervising committee CAFT and State Secretary of Home Affairs and Kingdom Relations Raymond Knops expressed “words of praise for Aruba.” She said there was “no valid reason” for Aruba to become part of the RFT.     The new Dutch conditions set Aruba back 34 years, to a time before it attained country status in the Kingdom. “Aruba enjoyed financial and political autonomy for 34 years. Now the Netherlands is forcing us to hand in our autonomy in four days, without consultation of the Parliament and without following the proper legal statutory procedure.”

Wever-Croes stated that in order to create a proper social and political discussion to check whether there is support for the conditions it was necessary to share the documentation with the Parliament and with stakeholders. “For me, transparency and good governance are not empty words, but principles, a way of handling, practice.”

The prime minister noted that this decision cannot be taken without a broad support. Several polls carried out by various media in Aruba since this week have pointed out that a majority of the Aruba population supported Dutch (financial) supervision.

An online poll of the Amigoe newspaper, showed that 69.2 per cent of its readers was receptive of the conditions. Many respondents provided a statement as to why they supported the Dutch conditions. Statements included: “No other option now, it is crisis,” “Control is needed to ensure that the funds end up in the right places,” “The abuse of government money has to stop” and “Who pays, demands.”

A poll of the Aruba news website 24ora.com with almost 10,000 respondents showed that a vast majority, 78 per cent, was a proponent of placing Aruba under strict financial supervision by the Netherlands, whereby 22 per cent voted against.

The results of another poll on the Aruba news website, noticiacla.com with some 2,700 respondents were a bit more balanced: 56 per cent agreed that Aruba should be placed under financial supervision as part of the RFT law.

The Aruba Parliament has already approved the 12.6 salary cut of civil servants, retroactively per May 1, 2020. The salaries of ministers and members of Parliament have been reduced by 25 per cent. The Aruba government met with the labour unions last week. During this meeting, the last differences of opinion were cleared. Aruba fully complies with the Dutch conditions. 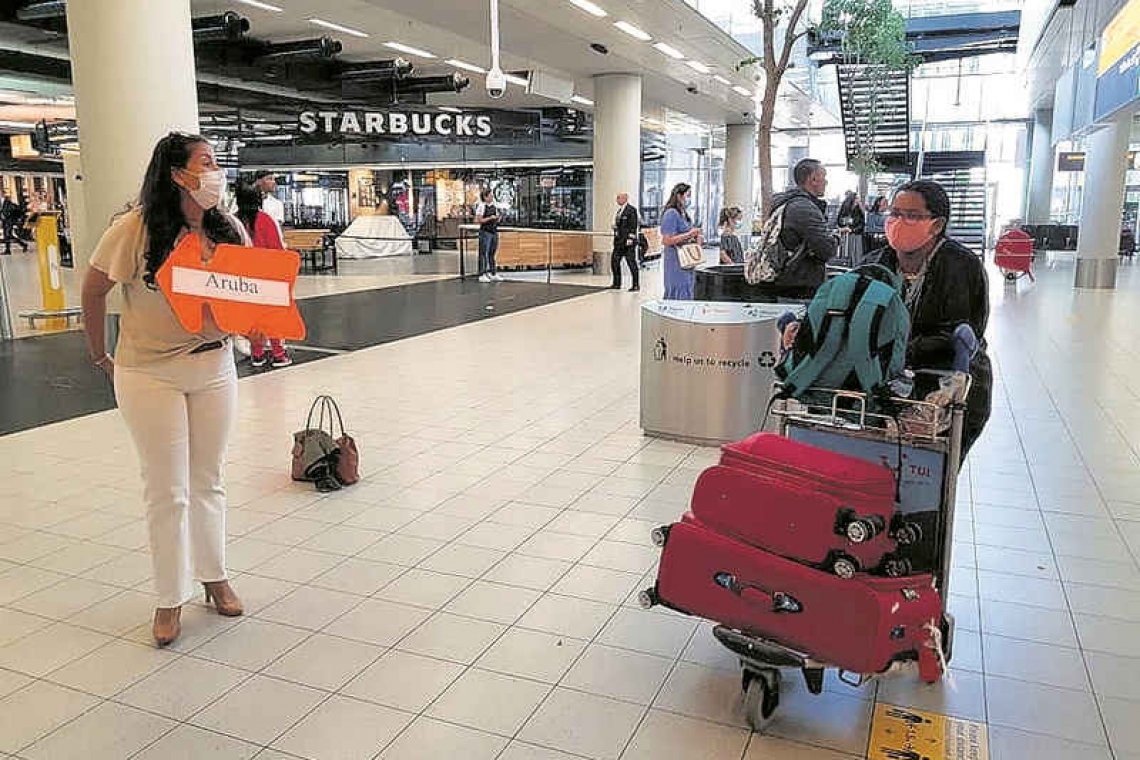 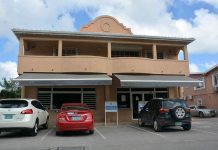 August 13, 2020
0
PHILIPSBURG--The Justice Ministry confirmed on Wednesday that one Immigration officer and one Customs officer are among the country’s positive coronavirus cases. These developments led to...

August 13, 2020
0
PHILIPSBURG--The Justice Ministry confirmed on Wednesday that one Immigration officer and one Customs officer are among the country’s positive coronavirus cases. These developments led to... 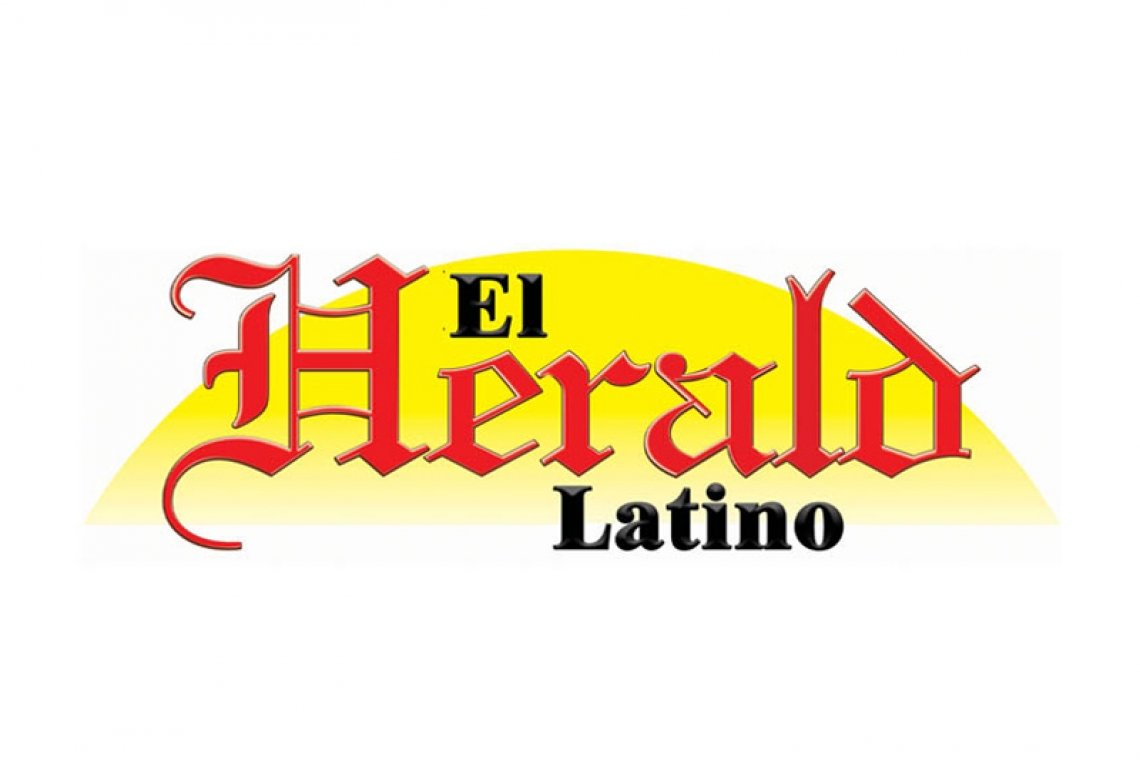 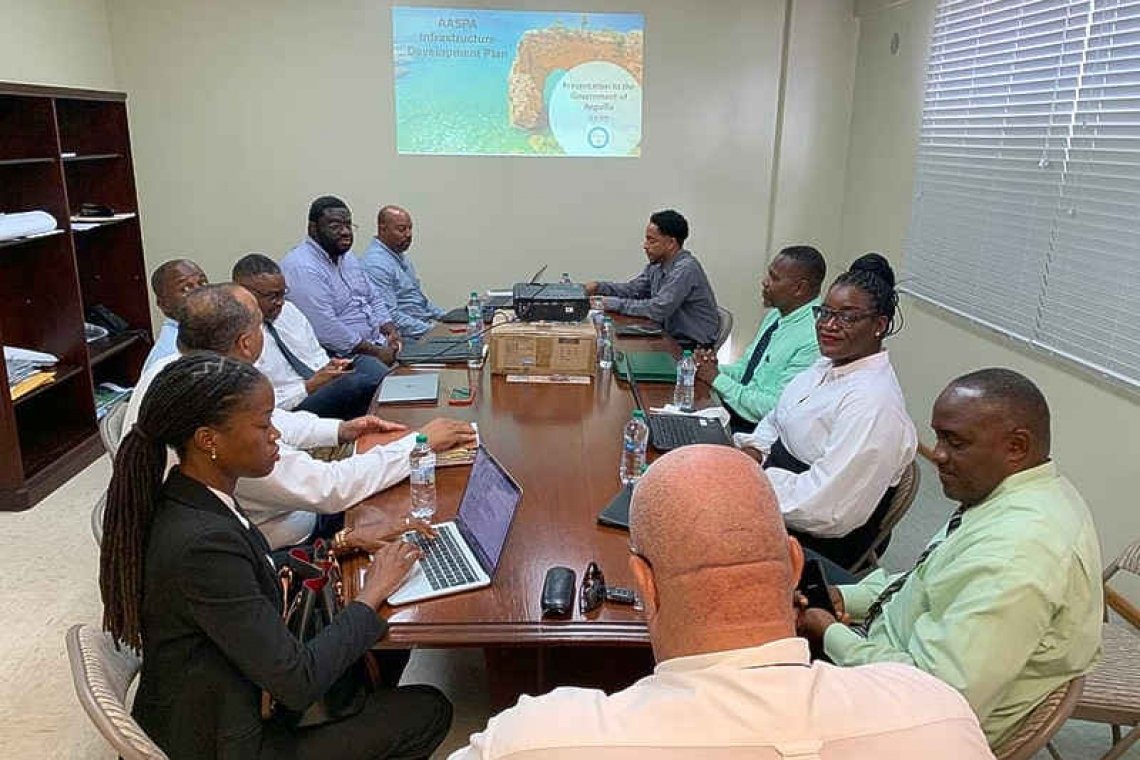 August 13, 2020
0
Members of government with officials from AASPA. ANGUILLA--The government of Anguilla met with members of the Anguilla Air and Sea Ports Authority (AASPA), including Chief...

Students departing St. Eustatius to continue education in Netherlands | THE...

St. Eustatius working on new methods for notarial services | THE...