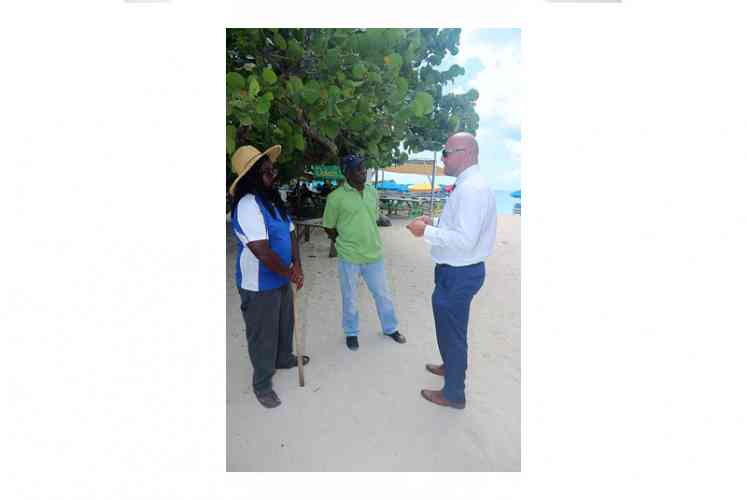 Despite it being low season more than 300 people are believed to visit the Mullet Bay Beach daily, according to a VROMI press release. The garbage situation has caused vendors to take to social media to voice their concerns.

“There is no time to joke about the environment, especially considering the monstrous storms the region has seen in recent years.

“I wanted to see first-hand what is taking place where garbage disposal at our busiest beach is concerned,” he told vendors. “This is our largest beach and the visitors who come here expect to see clear, clean water and beautiful sand. Every beach is important. And, if we have to take it one beach at a time, we will do our part to make sure St. Maarten’s beaches are clean for residents and visitors alike.

“The government normally does an excellent job cleaning the side roads, but since the first week in August this has not been done.

“When they cleaned, they even cleaned around the airport down to Mullet Bay and they raked the garbage up from the beach at least three times per week. Now we have to do it ourselves and it is quite a lot of garbage that is left behind,” said the vendors for Daleo’s Snack and SXM Crazy Beach Chairs.

The vendors were happy to see Wever’s response to their online post. They told him that the challenge for them is running their operation and cleaning the beach at the same time.

“Whenever there are holiday weekends, or even on Sundays when beaches are crowded, those visiting the beach tend not to take their garbage with them.

“So, we come in early before seven [in the morning – Ed.] to clean the beaches because we do not want the guests to come and see it like that,” the vendors explained.

Wever walked with the vendors and inspected the beach, witnessing several large piles of garbage which were left behind by persons who visited the beach.

Wever said to the vendors that he would have the beach cleaned. He also pointed out that there are not enough garbage bins on the beach, which he said is something his ministry will address.

Additionally, he pledged to sit with Tourism, Economic Affairs, Transport and Telecommunication (TEATT) Minister Stuart Johnson to discuss ways in which the two ministries can work together to clean-up the beaches and put proper signage to guide visitors on garbage disposal.

He also said Mullet Bay is one of the few beaches that still has greenery and care must be taken to ensure it is preserved.