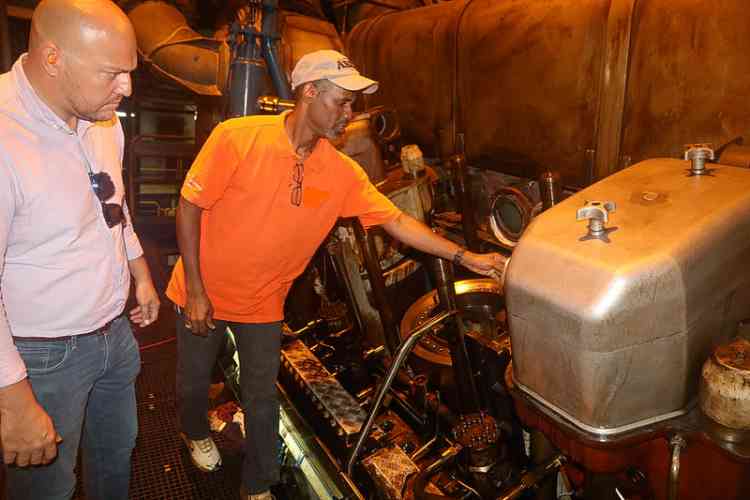 VROMI Minister Chris Wever (left) looks on as GEBE CEO Kenrick Chittick explains work being done to rebuild one of the damaged engines at the Cay Bay power plant.

Wever expressed his concern over St. Maarten’s high energy cost and said there is a need for permanent solutions to reduce the cost of electricity for the consumer.

He spoke with Chittick following recent power outages in St. Maarten that stemmed from a damaged engine and resulted in load-shedding for three days. Wever wanted to know about the company’s plans to move towards alternative energy sources, especially considering fossil fuel’s negative environmental impacts.

The increasing intense hurricanes, seen in St. Maarten when Hurricane Irma devastated the island and Hurricane Dorian’s recent destruction of the Bahamas, are also a cause for concern, said Wever.

“We cannot ignore our negative impact on climate and the role we can play in climate change even in the smallest way.

“Just by using alternative energy we can keep more money in the pockets of single mothers who have to struggle with the cost of school and clothes for their children and to maintain a household. We can keep a small business going because the owner now has enough money to pay his employees and maintain his operation.

“These benefits alone are significant wins for us, especially since we are still in recovery,” he said.

Chittick said the company has already been leaning towards solar energy.

Several options were explored, including putting solar panels on school roofs or over parking structures to generate energy. The discussions were put on hold after Hurricane Irma struck the island in September 2017, damaging many of the facilities considered for the programme.

GEBE has also looked at increasing its energy output capacity, Chittick said. It has  already purchased an area of land near the Cay Bay power plant where it plans to install a new engine. The plans call for the demolition of an old building that has been in existence for nearly 50 years.

Using liquid natural gas to power engines was also considered in the past. Whatever is ultimately decided, Wever said he intends to support the company’s move to cleaner, more cost-efficient sources of energy for St. Maarten.

Thanks to Sol Petroleum, GEBE does not have to search very far to source fuel. However, the challenge is GEBE’s storage capacity, which is too small to capitalise on global market changes in fuel prices. Whenever this is possible, the cost savings are passed on to the consumer, Chittick told Wever.

The question on many persons’ minds is whether the time has come for GEBE to move from fossil fuel with its high percentage of carbon. Many believe the Caribbean islands, such as St. Maarten, are ideally suited for the use of solar panels because of their year-round tropical sunshine.

“We must take stock of the impact we have had for many years on the environment. By our actions, we pollute the air we breathe, and we also leave a heavy financial burden for low- and middle-class income homes,” Wever said on Sunday

He also said he intends to work with GEBE and other public/private partners on establishing and implementing an alternative energy strategy so St. Maarten can contribute to mitigating climate change.

“I recognise that the initial cost for transitioning into alternative energy may be high, but a cost-benefit analysis will show that the benefits outweigh the cost,” Wever said.

GEBE is presently repairing the roof that houses two of its engines, after which the company will put those engines back online, according to a VROMI press release.