Home The Daily Herald Why Crop-Over in Barbados rocks 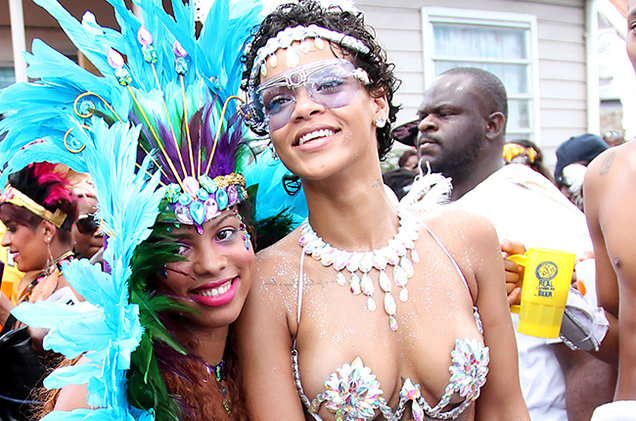 BRIDGETOWN, Barbados–Every island has its Carnival season, and this weekend in Barbados, music rocks. It’s Kadooment (an old Bajan word meaning a big occasion), which is the climax of the annual Crop-Over festival.

A bit of background: Crop-Over originated from a time when the sugar cane harvest was over, the back-breaking work was done, and workers held a Kadooment to celebrate their new-found leisure time. Today, Crop-Over is two months of parties and events, culminating in a series of street events over the August holiday weekend. And here are five reasons why it pays to be a part of the big jump up:

* You might see Rihanna up close. Barbados’ own super pop star tends to make it a point to come back home for the occasion, don her feathery costume and hit the road with everyone else. Unlike many celebrities, she’ll mingle and dance with ordinary revellers in her band. And locals tend to respect her personal space; after all, she’s one of us!

* It’s very safe on the road. The local authorities take public safety seriously, and the Barbados Defence Force is usually in discreet but visible attendance, fully armed but happy to sit on the sidelines. They are a wonderful deterrent to any potential baddies. Also the music trucks and general traffic flows are highly respectful of revellers on the road, especially since many have imbibed a little too much.

* It’s surprisingly intimate. Barbados’ Kadooment is big enough, yet friendly enough that you get to see many people. If you can see past the skimpy bikinis, feathers and glittery paint, you’ll find friends everywhere. And most Bajans make a point of welcoming overseas guests at this time.

* You’ll hear fantastic music. Every band on the road has its own music truck belting out the current season’s hits at heart-stopping, foot-stomping volume. While others have their own music, Barbados’ Crop-Over focusses on Soca – sweet, bashment, power, social commentary or whatever kind you like.

* It’s all about the rum. This is the place which invented rum (back in 1703), and Barbados rum is respected worldwide. As you might imagine, the divine liquid still lubricates every facet of the festival. You can mix it with almost anything. But out in the hot sun be careful; its effects will creep up on you when you least expect it!

Bonus: The beach! Unlike the case for many other carnivals, in Barbados you’re never far from the clear Caribbean Sea, and the major street party actually ends at a two-mile stretch of cooling water. You’ll see revellers walk straight in, costumes and all, to cool off after the hot dancing. And then the party simply continues! ~ Caribbean360 ~