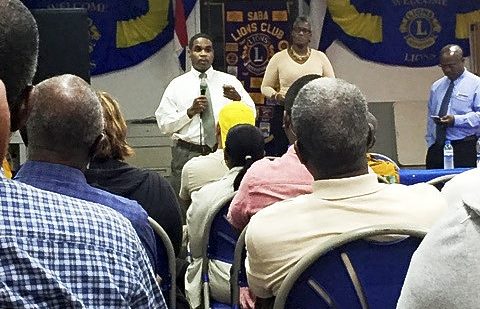 SABA–Windward Islands Bank (WIB) has delayed its closure of its Saba branch until the end of January 2017. The bank had initially set the closure of its local branch for November 30. In addition, the Dutch Government has agreed to cover the cost of keeping the Automated Teller Machine (ATM) on the island. The ATM will mainly function as a cash dispenser and will not be able to accept deposits.

According to WIB Managing Director Derrick Downes, the end result of 10-10-10 and the economic crisis in early 2000 are major events which impacted the closure of the bank’s Saba branch.

He said the bank closure was already projected at the same time discussions were ongoing on the dismantling of the Netherlands Antilles. He said that Saba’s population was too small, turnover insufficient, and overhead costs too high to maintain a healthy banking operation.

Downes said the closure of the Saba branch was a decision made by WIB’s shareholders. “We did the non-sensible thing for a very long time,” said Downes. “It has become very difficult after eight years of consistent losses.”

Those in attendance at the town hall meeting openly expressed their discontent as they feel they were being misled by WIB.

In October, Supervision Account Manager of the Authority for the Financial Market (AFM) Egbert Gerritsen accused WIB of neglecting its responsibility in properly informing their customers about the reason to close its Saba branch.

The AFM had put pressure on WIB to acknowledge the consequences of closure and to guide their customers on how to deal with the consequences. Since then, bank representatives have visited Saba on several occasions to assist clients in the transition.

During a recent visit Downes said that Sabans will be able to deposit or withdraw cash at any of the WIB or Maduro and Curiel’s Bank (MCB) branches on St. Maarten, St. Eustatius, Bonaire, Aruba and Curaçao. Initially, it was communicated that Sabans could only withdraw and deposit cash or cheques at the WIB branch on Statia.

This news was well-received considering that Sabans rely mostly on cash when doing business. In addition, Sabans will be able to request new loans and the refinancing of existing loans.