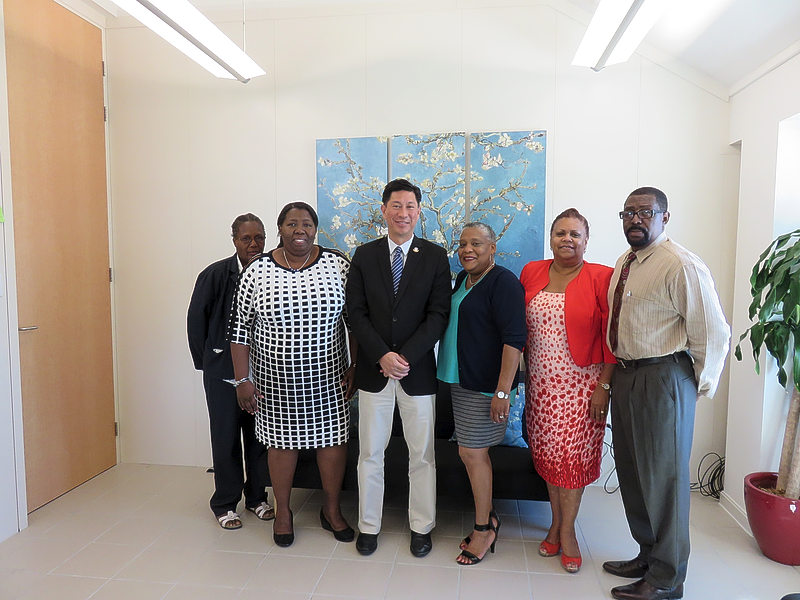 PHILIPSBURG–Labour Day celebrations, being represented on the board of Social and Health Insurances SZV, International Labour Conference, changes to the civil code, improved compliance and concerns regarding businesses encountering financial difficulties were amongst the issues representatives of the Windward Islands Chamber of Labour Unions (WICLU) discussed when they met with Labour Minister Emil Lee recently.

Based on the outcome of the meeting, the Labour Ministry and WICLU have agreed on key areas in the field of labour that will require collaboration/attention this year, starting with the upcoming Labour Day celebrations.

According to a press release, the Department of Labour had been taking the lead in coordinating Labour Day celebrations in the past. However, last year Lee turned over this task to WICLU to take on the role of coordinating the celebrations “for the event/activities to resonate with the working population.”

According to the release, in 2016, due to budget constraints, it was decided to not attend the International Labour Conference (ILO). However, WICLU has expressed interest in a delegation attending this year. “It was agreed that while the Ministry would prefer to host an event locally with support from ILO Caribbean, the Ministry would see if a budget was available to support a delegation in 2017.”

In addition, one of the critical legislative changes that the Ministry is committed to finalising is the changes to the civil code, and addressing the abuse of the short term labour contracts. The draft amendments to the code are supported by the labour tripartite and have been submitted to Parliament. However, due to elections and changes in Government, it has not yet returned on the agenda of Parliament, the release said.

Also two staff members from the Labour Department left to take up positions in different Ministers’ Cabinets leaving the department short-staffed. Lee expects to be in Parliament in March 2017 to renew discussions with Parliament regarding proposed changes to the civil code and the consensus document on labour reform.

The union representatives also expressed interest in strengthening union representation on the board of SZV. “Based on the impact that SZV has on the health and wellbeing of the groups that they represent, I could certainly understand their desire and will incorporate their desires in the selection of replacement board members for SZV,” Lee said in the release.

Also discussed were concerns about several businesses that were experiencing financial difficulties and the possible impact to the employees. Lee assured the representatives that based on their concerns, the Department of Labour would check on the mentioned concerns.

“I am very pleased with the positive and constructive relationship and dialogue that we have with the unions. Over the past year, we have built a great relationship based on open communication, trust and respect,” Lee said.