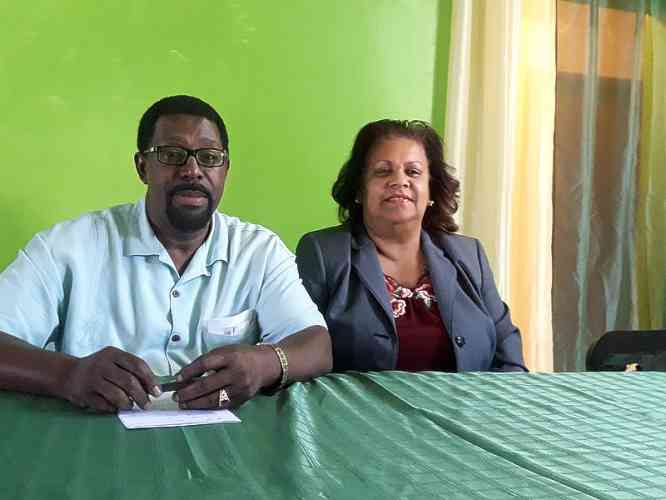 PHILIPSBURG–The Windward Islands Chamber of Labour Union (WICLU) is not happy with what it considers the gross violation of workers’ rights in the country, and the Chamber is calling on employers to adhere to the country’s labour laws.
WICLU member Theophilus Thompson of Workers Institute for Organised Labour (WIFOL), said earlier this week that all unions in the country are fighting different labour battles in an effort to protect the rights of their membership. While some labour issues are under control, others are not.

With many businesses not functioning since Hurricane Irma, Thompson said the union has noticed that the rights of many workers are being violated. He said one example of the violation is that many businesses have been illegally applying the “no work no pay” policy as an excuse to not pay their workers. There is a provision in the civil code, Thompson explained, which indicates that when a worker refuses to work on his or her own accord, there should be no payment.
However, if a worker is not allowed to perform his/her duties due to no fault of their own, they are entitled to payment. Currently however, some employers are asking workers to remain at home and using this as an excuse to apply the no work no pay policy.
“The hurricane is not the fault of the employee so they have to be paid. Many companies have business interruption insurance, which includes the payroll for employees,” Thompson argued. He urged businesses to stop the practice of “kicking” their workers out of their jobs because they do not want to pay them. Workers are also being advised to immediately report cases of violation and injustice to the Department of Labour.
Thompson said he has had to initiate court cases against four companies for gross violation of workers’ rights. One of the companies has since settled out of court and three cases are pending.
He said also that many employers have been using divide-and-rule tactics, by going against their Collective Labour Agreements (CLAs) and calling in workers individually to sign for things that are contrary to the stipulations in their CLA, without informing the union, as should be the case.
He said also that a distinction needs to be made between hotel and timeshare properties. While the income of hotels is dependent on check-in guests, the annual income of timeshare properties is collected in maintenance fees, which are paid by timeshare owners once annually. “So even though we had a hurricane, the maintenance fee for timeshare properties has already been collected,” he said, noting that there is no reason for these properties to not pay their workers.
The rights of workers are enshrined in International Labour Organisation (ILO) conventions. Everyone has a right to decent work and to earn a living wage. St. Maarten’s minimum wage is not a living wage, Thompson contended.
With some resorts, Thompson said, WIFOL has been able to agree to mutually acceptable arrangements to enable workers in resorts’ maintenance, landscaping and security departments to be part of the reconstruction process. Other workers, who are willing, can also be part of the process voluntarily.
WICLU President Claire Elshot of Windward Islands Teachers Union (WITU) said the abuse of short-term contracts is very much evident in the labour force these days. She was particularly critical of the actions of a casino in Philipsburg that has been trying to get rid of its permanent workers, some of whom have racked up 25 years of employment at the establishment.
She urged Labour Minister Emil Lee, whom she said is the same ethnicity as the bosses of the casino in question, to educate them on the laws of St. Maarten. “The Minister of Labour has to step up to the plate,” she noted.
Elshot believes the employment permits of employers who violate the country’s labour laws should be revoked. She said also that solidarity is a powerful tool against injustice, and she called on workers who are not yet unionised to join a union soonest.