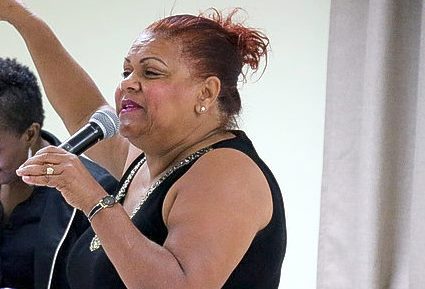 PHILIPSBURG–Windward Island Chamber of Labour Unions (WICLU) President Claire Elshot has issued a call on Members of Parliament (MPs) to “step up to the plate” and address the abuse of short term labour contracts that continues to stifle workers who are affected.

In her Labour Day address at Divi Little Bay Beach Resort on Monday, during which three labour stalwarts were honoured, Elshot said while Labour Day has been proclaimed internationally to mark and celebrate the struggles and achievements of workers and workers’ organisations, the union has to reflect on some of the issues affecting workers in St. Maarten.

She said workers were still being exploited in various forms in St. Maarten including via short term labour contact, which is disruptive to their lives. “Short term contract workers are in a desperate socio-economic situation and are patiently waiting for the widely discussed, debated and anticipated amendments to the law on short term contracts… to eradicate the abuse of these workers thereby creating job security and enhancing the stability of the workers in their workplace,” Elshot said. “This has the benefit of increasing their purchasing power and the ability to provide for the wellbeing of their families. It is therefore with keen interest, that we as unions are involved and engaged in social dialogue via the established Tripartite Committee.”

Elshot said unions would like to celebrate Labour Day as a victory for workers, particularly those working in casinos. “Let’s be honest, these workers are being rotated and given short term contracts with longer and longer waiting periods not because there is no need for them, but because the loopholes in the laws encourages this to avoid the workers being employed in a permanent function within companies. A company would send home these contract workers for three to six months after their contract expires and expect them to provide for their families in these three to six months without a job or an income and then rehire them under the same conditions. It is time for the workers to realise that they need job security, a decent pay for decent work and a living wage to be able to take care of their families. My message is a call for action on behalf of these workers.”

She issued an appeal to MPs to make a decision on the civil code changes that would benefit the workers as “they have waited long enough. Give them what they deserve.”

She also called for the minimum wage to be increased to a liveable wage for minimum wage earners. “It would be putting extra spending dollars in their pockets… and will increase the purchasing power to be able to take care of their families.”

Elshot told workers that when they unite in solidarity, it helps to bring about changes that would benefit them. “There is a lot to be done, don’t sit back and depend on others to do for you what you will be able to achieve in unity with others. As unions we will combine our efforts for the accomplishment of these and many other goals on behalf of the workers,” Elshot said.

“Therefore it is important for the workers to realise the benefit of their rights to be organised with the representation of a trade union and maintain the recognition of trade unions as their legal representative… Our action here today, to recognise and celebrate jointly our national heroes, who have made their contribution to the trade union movement and served workers over the past decades whether as an active voice or behind the scenes, should also show workers the importance of their voice.”