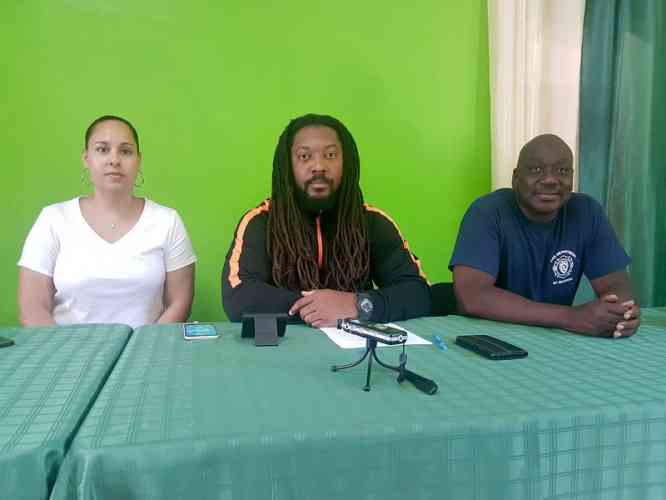 In a press conference on Wednesday the union provided an update on the issues raised in the meeting. In this meeting the union discussed their concerns related to the occupational health and safety of the workers in the fire department. The Secretary General of the Ministry of General Affairs was also present for this meeting.

Riegnald Arrindell, General Secretary of WICSU/PSU said that during this meeting the union briefed management of the fire department on the current situation and that management have passed this information on to the relevant authorities.

Arrindell provided examples of some of the grave conditions the fire fighters are faced with stressing on the deplorable working conditions the workers have dealt with on a daily basis. He said workers are often faced with mopping and sweeping up of water, on a frequent basis disposing buckets of water from leaking areas almost daily. This includes the sleeping areas of the workers.

“It is unjustifiable that our workers have to function in such conditions every day. These are the workers that are tasked with responding to emergencies and disasters and here they are in a building that jeopardizes their health and wellbeing,” he said. He noted that the most pressing issue they are concerned with is the possibility of mould and fiberglass dust in the ventilation of the building.

Arrindell said that in the meeting with management a point repeatedly stated was that government currently has no funds and have reached out to the World Bank seeking further assistance in this matter.

“The health of our members should not be conditional on government’s level of finances,” he said. “The men and women of this department do not deserve this; civil servants don’t deserve this.”

Arrindell pointed out that despite the circumstances the workers are dealing with in their building, the firefighters have never let that get in the way of their performance and ability to serve their community. He noted that the department responded to a call on both Tuesday and Wednesday at the government building.

“Regardless of what these men and women are going through, they are still executing their duties in a timely and professional manner,” he said.

The union shared that they do not wish to cast any direct blame to anyone as it is understood that many of the issues addressed are “outside the hands” of management. “We (union) do believe that the owners of the building have a responsibility and the government of St. Maarten as an employer has a duty of care to ensure and protect the wellbeing of the fire fighter,” Arrindell added. “What message is being sent when we allow our workers to continue in this situation, what does this say about our standard and our values?” he asked.

The union drafted a report based on their observations and submitted this to the Inspectorate for Public Health. As result of this report the Inspectorate followed up with an inspection of the fire and ambulance building on Wednesday. Arrindell said that the union awaits the results of this inspection. “The results of this inspection will determine the next course of action for the union.”

“Each passing day the level of dissatisfaction, the nervousness, the anxiety, the uncertainty among our members is intensifying,” Arrindell said. “We ask to fix and fix it now.”

Arrindell said in closing that the union are willing to meet with the Minister of General Affairs to further discuss their grievances.

Riegnald Arrindell and members of the fire department.