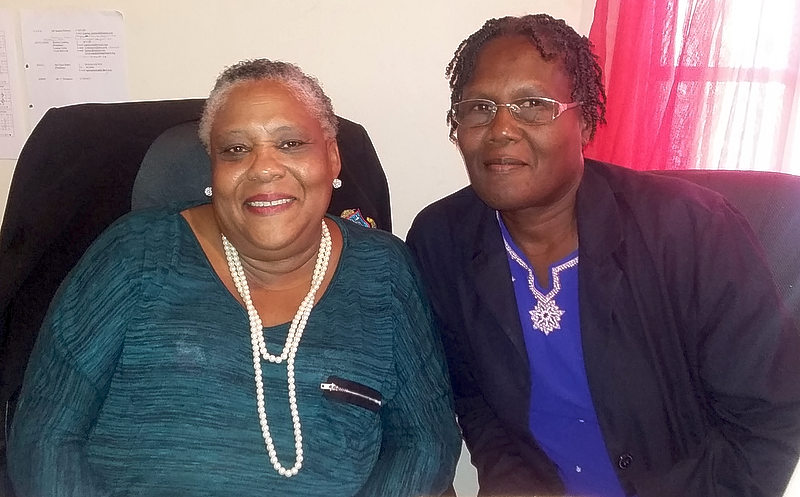 PHILIPSBURG–President of the Windward Islands Civil Servants Union/Private Sector Union (WICSU/PSU) Julia Solognier on Tuesday broke her silence on the issue surrounding the transfer of the Sonesta Maho Beach Resort workers into a new company and on the handful of workers who had taken the union, Government and their employer to court over the process.

Solongier, who spoke to The Daily Herald in the presence of WICSU/PSU Vice President Deborah Rombley, said some of the workers had been trying to create the impression as if the union had done something wrong.
She said this issue dates back to February, when the union was approached by workers regarding letters they had received seeking their termination from one company and a contract for their employment into another. The union moved to seek advice from its legal advisor and subsequently went to the Labour Mediator and its attorney. The mediator was later asked to get involved to ensure that MAHO had been following the correct procedures and doing the correct thing where the workers were concerned.
A number of meetings were then held with management for several months ending in June on the issue. Shop stewards sat in on the meetings. During these meetings, Solognier said it was successfully negotiated that MAHO will ensure that all the accrued benefits and years of service of the workers will be transferred from the old company to the new one.
On May 30, the union called a meeting to update workers on the issue, but no one showed up. The issues agreed to were subsequently put into a transfer agreement that was signed by parties including the union. Also signed was a document committing management to ensuring that the cessantia for the workers would not be lost in the process.
Solognier said that a shop steward appeared to not agree with the agreement signed. Some workers she said also felt that they had to be paid cessantia before being transferred into the new company.
The dissatisfied shop steward consulted with an attorney on the transfer agreement and the attorney reported that the content was fine. A second attorney was also consulted who also indicated that the agreement was ok for the workers. However, when a third attorney was consulted, the attorney disagreed with the agreement and agreed to fight the matter for the workers.
At the time 486 of the Sonesta Maho workers had already signed the agreement and about 24 (approximately 4.1 per cent) decided to challenge the termination and new contract in court. The workers, who were challenging the process resigned from the union and headed to court. The number of staffers who wanted to take legal action dropped to 13 and later nine, as more employees signed the agreement to remain employed at Maho.
During the initial stages of the matter, the company sat with the workers and offered to pay out those who did not want to remain with the company, Solognier said. The other option was to sign the new contracts and remain with all their accrued benefits. The workers, who contested their termination and new contracts wanted to be paid out and still remain employed with the new company with all their accumulated benefits, but the employees were told to choose one or the other.
Solognier said the court verdict was in line with what the company had offered the workers from the inception – that if they did not want to be employed with the new company, they can be paid out.
She said the union had the best interest of the workers in mind during this entire process, when it sat with management and hammered out an agreement ensuring that all their accumulated rights and benefits would be transferred into the new company with them. She said the union will continue to work in the interest of its members.
Sonesta Maho had told this newspaper earlier that as The Maho Group continues to “grow and prosper” with its new real estate developments and business opportunities in other destinations, the Group decided that a re-organisation of the company was necessary, thereby creating operating companies for each facet of its hospitality ventures, each of which are wholly-owned subsidiaries of Resort of The World NV.
All workers were being transferred and all staffers will maintain 100 per cent of their seniority and accrued rights and benefits. The process took several months and had been carried out by the Group’s managers, attorneys, Labour Mediator Rafael Boasman, the legal advisor to the Ministry of Labour, and WICSU/PSU.
Solognier became WICSU/PSU President in January, taking over from former President Henrietta Doran-York, who resigned to take up her current post of Minister Plenipotentiary in The Hague.