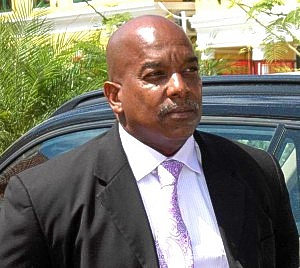 WILLEMSTAD–The trial of the criminal case against the accused Burney “Nini” Fonseca (Curaçao, 1971) will take place on Wednesday, April 19 and Friday, April 21. Fonseca is a suspect in the investigation into the intellectual authors of the murder of then PS-leader Helmin Magno Wiels dubbed “Maximus.”

Fonseca is currently serving a prison sentence for exporting cocaine and money laundering. He will not be personally present in the courtroom during the handling of the case, but attend the hearing via video link.

Fonseca is seen by the Public Prosecutor’s Office as the link between those who ordered the assassination of the outspoken parliamentarian in 2013 and the paid executioners. The latter were already convicted in the “Magnus” case regarding the killing itself and the High Court in the Netherlands has since confirmed the life sentence of triggerman Elvis “Monster” Kuwas, which thus became irrevocable.

Fonseca’s trial started on August 8, 2014, but was postponed indefinitely because the investigation had not yet been completed. The case is now in such an advanced stage that it can go to court.

The probe into the actual intellectual authors is still ongoing.