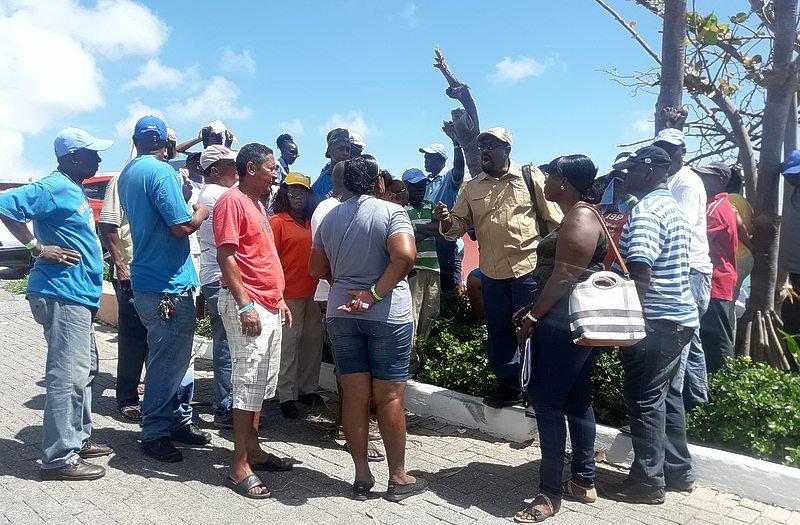 The work week has been reduced from six to four days for all permanent workers. The new minimum work week comes days after workers held a protest action in front of the resort contesting the reduction of their work week from six to three days, a move that the union had said was a unilateral decision by the company that was in contravention of the Collective Labour Agreement (CLA). The protest action led to a meeting between the WIFOL and several Divi overseas executives.
WIFOL President Theophilus Thompson who met with the Divi officials late Tuesday on the workers concerns and other issues, told The Daily Herald that the meeting had been positive. “We had a fruitful discussion. The clarity that was brought forward in the meeting is that the CLA is agreement between employees and management and any decision that would affect workers has to be in accordance with the article in the CLA,” Thompson said. “Management acknowledge that they had to talk to the union especially for decisions made during the crisis period. It was cleared up that any decision that would affect the workers has to be achieved through dialogue: discussion and consensus.”
The union president said once this was made clear, both sides then agreed upon the new minimum work week. The resort is about to start its reconstruction in full swing anytime now to restore the property to pre-Hurricane Irma conditions. WIFOL and Divi are expected to meet again in three weeks on November 7 to continue discussions as to the participation of workers in the reconstruction phase.
Thompson said this will ensure that workers will still have jobs until the resort reopens and everyone go back to their regular positions hopefully by May 2018. “No one will be out of a job. They remain employed with the company and what we will endeavour to do in three weeks is to have everyone participate in the reconstruction – the work week will also be discussed again.”
In the meantime, Divi and WIFOL will hold a joint meeting with the workers on Thursday to update them on the new developments regarding their new work week and the retaining of their benefits.