Home Local News William: Complaining to Kingdom Govt. about decree not the way to go 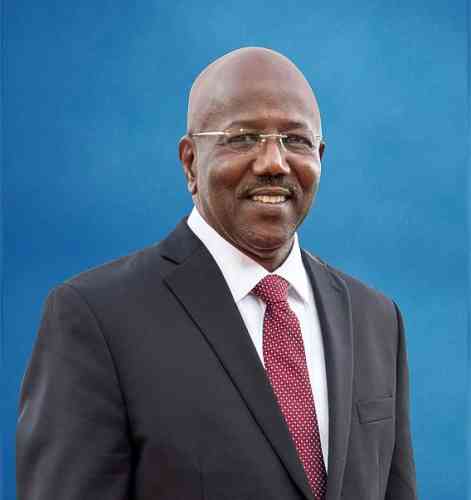 PHILIPSBURG–Former Prime Minister William Marlin, on Thursday, said the Romeo-Marlin cabinet is making St. Maarten look “ridiculous” by “complaining to the Kingdom Government” about the election decree under the pretext of upholding the constitution.

Marlin said that the new cabinet is also circumventing Governor Eugene Holiday by approaching the Kingdom Government.
Marlin was at the time reacting to news that government had sent a letter to the Kingdom Council of Ministers regarding the November 12 election decree which government believes is an infringement of the country’s constitution. “The people of St. Maarten deserve much better than this,” Marlin said about the move. “It is either that our honourable Interim Prime Minister doesn’t have a clue as to how government really functions, or she is clearly and openly demonstrating that her cabinet doesn’t want to deal with his Excellency our Governor Drs. Eugene Holiday,” Marlin said in a press release.
Elections for Parliament are being held based on the National Decree signed by Holiday and Marlin as former Prime Minister. Prior to that, a first decree was signed on November 3, 2017, following the decision of the Council of Ministers to dissolve Parliament.
“Complaining to the Kingdom Government is certainly not the way to go. If the Interim Cabinet wants to change the date of the elections or call the elections off altogether, what they need to do is take a decision in the Council of Ministers and submit a draft National Decree to that effect to the Governor for signing.”
The Governor, Marlin noted, will have two choices either that he signs the Decree or if he does not agree with the Decree, he would have to send it to the Kingdom Government for annulment. “It sounds like the Leona Romeo-Marlin Cabinet has chosen to go around the Governor and complain directly to the Kingdom Government.”
He said this could only be seen as opening the door “once again” for the Kingdom Government to interfere in St. Maarten’s internal affairs. “All the Interim Prime Minister is doing is making us look ridiculous and worse yet, claiming that she is approaching the Kingdom Government because she has an obligation to uphold the Constitution of St. Maarten.
“It looks like the Interim Cabinet and the majority of eight in Parliament have decided to throw the doors wide open and invite the Dutch and Kingdom Government to side-line the St. Maarten Constitution and allow the Kingdom Government to decide on how things should be done here at home.
“The Interim Prime Minister, rather than writing letters to the Kingdom Government asking them to take even more control of our internal affairs, should concentrate on ensuring an orderly process of the February 26, 2018 election for a new Parliament for St. Maarten. The Interim Prime Minister has to come clean and not try to confuse the people even more.”
He said the constitution of St. Maarten and the Organic Laws had been hurriedly adapted before October 10, 2010, as one of the pre-requisites for St. Maarten to become one of the four countries in the Kingdom of the Netherlands. “Unfortunately, neither the Constitution nor the Organic Laws have been seriously reviewed by Parliament since 10-10-10.”
He said the accusations that the Decree to dissolve Parliament and hold snap elections is in violation of the Constitution stems from the fact that no special provisions have been made in the Electoral Ordinance for the holding of snap elections, in keeping with all legal requirements. “Supposedly, this is the very same reason why in 2015, when the Gumbs-Cabinet received a Motion of No Confidence and subsequently took a decision to dissolve Parliament, the Decree did not go into effect on the date it was signed, but a date in the future. This was precisely done to allow for the requirements in the Electoral Ordinance to be lived up to. Was the decision then in keeping with the Constitution? Actually not! During the next two years that followed the signing of that Decree by Governor Holiday and former Prime Minister Gumbs, Mrs. Sarah Wescot-Williams has been the Chairlady of Parliament and no amendments were ever tabled or even discussed to change the Electoral Ordinance.
“When the William Marlin Cabinet took the decision to dissolve Parliament the dates for the election and for postulation were established based on the Constitution, but this created a conflict with regulations in the Electoral Ordinance.”
He said the voter’s registry is closed 30 days prior to the date of the nomination date. The public has to be notified of this via a public notification. That first Decree was signed on November 3, and nomination day was on November 13, 2017. As such the voting registry would have been closed in October and without the public having been notified.
As per Article 22 Paragraph 4 of the Electoral Ordinance, the chairman of the Central Voting Bureau has to give a public notice of the date of postulation three weeks before nomination day. That also could not have been possible as the National Decree was signed on November 3, 2017 and postulation day was set to be on November 13, 2017.
In accordance with Article 36 Paragraph 2 of the Electoral Ordinance, the Minister of General Affairs has to issue a decree indicating the colours that could be used for the lists of the different political parties. That decree has to be issued 14 days before postulation day. Again that legal requirement could not be met with a decision for snap elections.
In accordance with Article 22, Paragraph 1 of the Electoral Ordinance, only political parties registered at the Electoral Council can submit a list of candidates on postulation day. However, the Ordinance on the Registration and Financing of political parties, requires that a political party be registered with the Electoral Council, six weeks before the date of postulation. That also would not have been possible.
“Rather than misinforming and misleading the people in general and the voters in particular, the Interim Honourable Prime Minister Leona Romeo-Marlin and others should tell the whole story about the reason why elections will be held on February 26, 2018 upcoming,” Marlin noted.