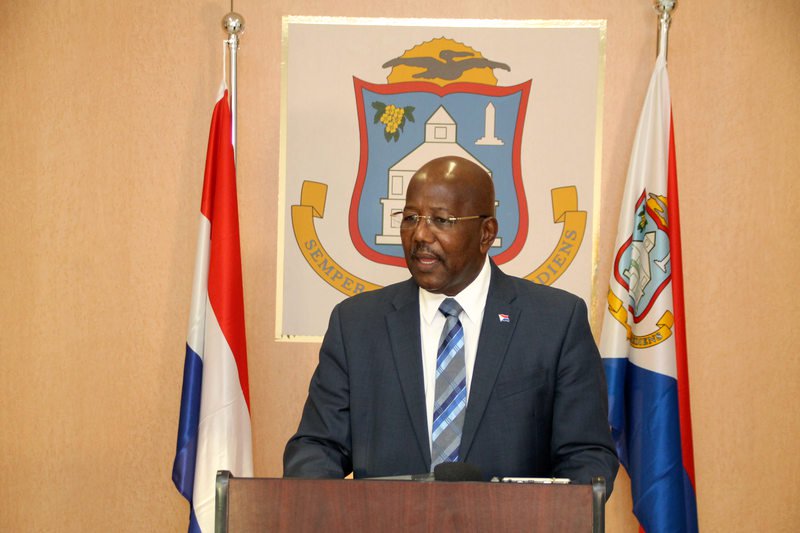 PHILIPSBURG–The European Union (EU) has agreed to provide assistance to the island for joint projects that would benefit both Dutch St. Maarten and French St. Martin, Prime Minister William Marlin said at a press conference on Monday.

Marlin said he had spoken to EU Director for Development Coordination for Latin America and Caribbean Jolita Butkeviciene on the matter of aid recently. He said he had discussed whether EU funding is available to assist St. Maarten and the possibility for extra funding for the country given the devastation caused by Hurricane Irma.
The EU is already set to fund several projects in St. Maarten, including the 9th, 10th and 11th EDF. The 10th EDF is the sewerage project in Dutch Quarter and the 11th EDF is a joint sewage plant for St. Maarten and St. Martin.
Marlin said Butkeviciene had informed him that funding can be made immediately available from the funds that had been set aside for the 10th EDF project. However, Marlin declined to tap these funds, as he said it would be unfair for the people of Dutch Quarter for Government to use up those funds and leave residents “hanging again.” That project was re-tendered recently, as the original bids were too high, and the project seems to be making a “breakthrough” now.
After further discussions, Marlin said the EU official had said funding is available for joint cooperation projects between the Dutch and French sides. “I said yes. And she said … that she will immediately start working on it.”
Marlin said he had touched base with President of the Collectivité of French St. Martin Daniel Gibbs the following day to update him on the matter, but Gibbs had been off-island at the time and promised to get back to him when he returns.
“I thought nonetheless that it is important to let the public know that we have agreed to joint projects,” Marlin said. He said a possible joint project that can be considered for the EU funding would be the cleaning of Simpson Bay Lagoon, as there were many vessels from both sides of the island in the Lagoon.
Another possible joint project would be creating a new access road for the enhanced flow of traffic between the two sides of the island. One possibility is to have this access road between St. Peters and French St. Martin. Access between the two sides of the island is currently via Oyster Pond, French Quarter, Cole Bay and Lowlands. “Brussels is looking at possibilities and the French will agree, I am sure, as well,” Marlin said.
The EU official also informed Marlin that any EU funding for hurricane recovery for the country will be channelled directly from Brussels to St. Maarten and will not go via the Dutch Government unless St. Maarten makes this specific request. She said also that no hurricane recovery funding for St. Maarten has been channelled to the Netherlands. She also has agreed to do her utmost reduce the bureaucracy and red tape relating to providing the funding.
Marlin said there is also 40,000 euros for regional projects about which discussions are being held. A proposal will be made during an upcoming meeting in Bonaire for 20 million euros of those funds be allocated to the country.