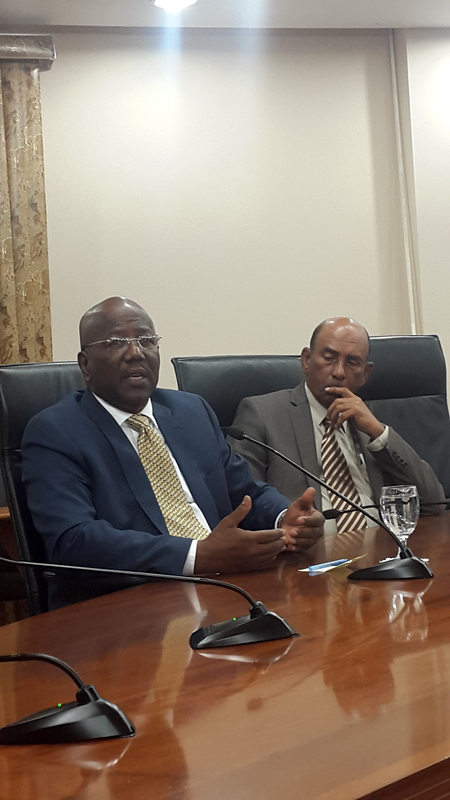 PHILIPSBURG–Prime Minister William Marlin is “happy” with the tossing out of the national ordinance establishing an integrity chamber by the Constitutional Court last week. Government’s Legal Affairs Department is reviewing the verdict to render an advice to the Council of Ministers on the way for forward.
Marlin told the press on Wednesday, a week after the verdict was rendered, the law “criminalized” the entire community, would have left people “guilty until proven innocent” and gave “far-reaching powers” to the people related to the chamber.
“We have to say ‘Thank God for the Constitutional Court,’” Marlin said. Had the Court not been in place, “the wishes of the Dutch” as enshrined in the rejected law would have taken root. St. Maarten is the only country in the Dutch Kingdom with a constitutional court that scrutinizes legislation passed by Parliament if a complaint is filed by the Ombudsman.
A lengthy complaint against the law was filed in September 2015 by Ombudsman Nilda Arduin. The Court found the complaint to be justified and struck down the law using the powers granted to it via the Constitution.
The verdict was “no surprise” to Marlin, who had vehemently opposed the law when it was tabled during his tenure as an opposition Member of Parliament (MP). He along with other National Alliance (NA) parliamentarians had voted against the law. The then United People’s (UP) party-led coalition had supported the law. The UP fraction abandoned its more than two dozen tabled amendments to the law to support the legislation.
The Dutch Government has been very insistent about need for integrity issues in St. Maarten to be tackled and solved by Government and had even gone as far as to propose its own version of the now struck down law. Asked if any discussions were had with the Dutch since the Constitutional Court verdict, Marlin said “no contact” from either side has been made so far.
The past government, based on the outcome of several integrity assessments dating to 2014, had committed to carrying out recommendations outlined in those reports. That commitment remains in place under the current government. Marlin said several laws in need of updating or new laws to close loopholes, as per the recommendations, are in the offing.
The Central Bank of Curaçao and St. Maarten (CBCS) has assisted Government with retaining legal experts to work on the laws. Marlin expects a report on this legal drafting and amendment process “soon.”
Source: Daily Herald
William happy with verdict on integrity chamber law