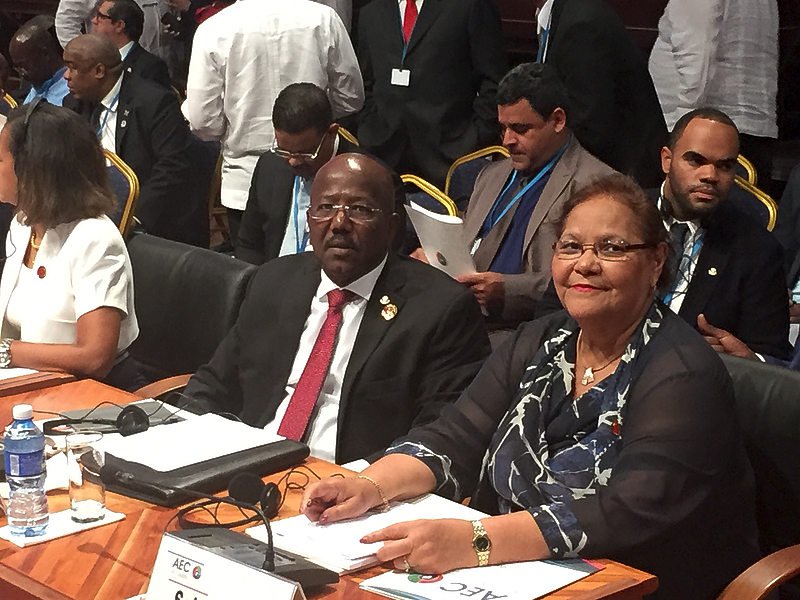 HAVANA, Cuba–The lifting of the embargo on Cuba should not be seen as a threat to the Caribbean tourism product, but as a chance at new opportunities and increased regional cooperation and integration, Prime Minister William Marlin told fellow Caribbean heads, including Cuba President Raoul Castro Ruz, in the recent summit of the Association of Caribbean States (ACS) held on Cuba.

Marlin, in his address at the ACS session, also cited the Caribbean’s resilience after the 2008 global financial crisis.
“Following the 2008 financial crisis, Caribbean countries have, to some extent, been able to reprioritize and rebuild their economies, a true testament to our resilience. Despite its negative associations, the financial crisis gave impetus for our realization of strength in numbers,” he said. “This collective strength and resiliency is arguably more necessary today given the increasingly transnational nature of the challenges being faced by the countries in our region.”
Tourism, one of the focus areas of ACS, remains beyond measure the single most important, and in some cases, only economic pillar for many in our unique region, Marlin said. “As a successful veteran, St. Maarten has watched as the industry has transformed and redefined itself over time,” he said. “We praise the Association’s role in catalysing innovative approaches to not only keep relevant our destinations, but give more ownership to local stakeholders through its promotion of Multi-Destination Tourism.”
In light of the International Decade for People of African Descent, Marlin said, “I am happy that we have acknowledged this history, paying homage to those whose sacrifices have built this: our Caribbean. Rooted in this common history and looking forward and embracing what makes each country special, St. Maarten believes that together we can create a unique tourism product in our region.”
He added: “Our ability to make such an initiative successful lies in our ability to sustainably manage our natural resources, taking into consideration our rich biodiversity and the associated effects of climate change.”
To that end, efforts to ensure cleaner, more sustainable sources of energy are not only prudent environmentally, but financially as well, he said. The countries in the region cannot do this alone and as such he said St. Maarten praises the important work done by the Association in the field of natural disaster mitigation, taking into account the principles of the Sendai declaration.