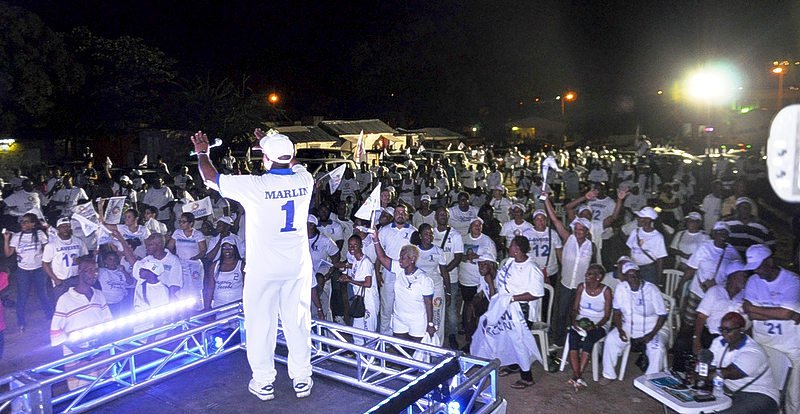 CUL DE SAC–Outlining some of the accomplishments the National Alliance (NA)-led government has delivered in its short nine months in office, NA Leader Member of Parliament (MP) William Marlin on Saturday called on the electorate to give the party eight to ten seats, so that it can continue accomplishing for the people of the country.

Marlin alluded to the opening of the new government administration building; the balancing of the 2016 budget; ground-breaking to signal the start of much-needed construction of Prins Willem Alexander School (PWAS); repair works to Front Street, which had been in a dilapidated state for years; the start of works to complete Back Street, and the work to connect the homes in St. Peters to the main sewage system, amongst other projects, as promises government had delivered on for the people of St. Maarten, although it was in office for just nine months.

Other candidates alluded to other accomplishments, such as the collection of long-overdue outstanding casino fees, which means that government did not have to increase motor vehicle tax as the former government had been pushing through with no prior notice. The planned Pearl of the Caribbean project, which will create hundreds of jobs for residents, and make St. Maarten a centrepiece of the Caribbean, is one of several initiatives to be continued. “With NA, a promise made, is a promise kept,” Marlin said.

He said this is an important election for St. Maarten, as the people have been “crying out” for a stable government. He called on the electorate to go out early today and vote so that by noon the NA can “seal that victory… Send a message. There will be no green in between, the government will be all white and it will be National Alliance. ”

The accomplishments of the sitting government began soon after it took office. The former government took nine months to “find” all of its ministers, while the ministers in the NA-led government were screened and in office within weeks.

Marlin said, while the former United People’s (UP) party-led government couldn’t balance the budget, and had the country placed under financial supervision in 2015; NA Minister and candidate Richard Gibson managed to “do what the others couldn’t do” and balance the 2016 budget in less than four months and on September 1, presented a balanced 2017 budget.

For eight years, St. Maarten had been paying for an unoccupied new government administration building. When the NA-led government took office, it promised to complete the building, and last Friday, the building was opened and Marlin said he held his first meeting in his new office. He told supporters he had no qualms on being screened and he will be the next Prime Minister.

He alluded to UP’s failed promises that it would start construction of a new hospital for St. Maarten within its first 100 days in office, but noted that although the party was in office for almost 400 days, it did not deliver. When the NA-led government entered office there were no plans in place, just an agreement with a company for the people to pay US $100 million for a hospital. The sitting government through a transparent process over the past nine months put plans in place and is on its way to have a new general hospital for the country for half that price at US $59 million.

He also spoke of the Pearl of the Caribbean project, which he said would be the biggest project ever to be executed in St. Maarten, even bigger than Mullet Bay. It would make St. Maarten the centre of the Caribbean; provide jobs for hundreds of residents and create business opportunities for the populace. Additionally, the developers have agreed to support a cross section of local institutions and groups by agreeing to donate 4,000 solar panels to the country (2,000 for schools and 2,000 for the homes of seniors); 10,000 LED bulbs; 500 inverted air-conditioning units to schools and 200 tables and desks for Charlotte Brookson Academy (CBA) for the Performance Arts. “When we say we deliver, it’s because you can look around and see the work that has been done,” Marlin said.

Noteworthy was the fireworks that lit up the sky towards the end of the speech of NA MP Christophe Emmanuel, who said the party will be reflected with a bang.