Home Local News William says St. Maarten has Plan B, but is confident that reason... 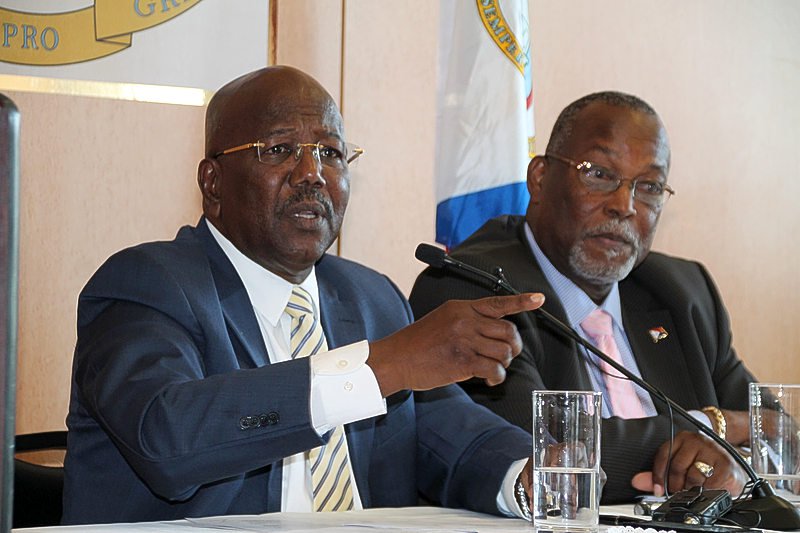 PHILIPSBURG–The conditions set by the Dutch government as a basis for providing financial recovery aid to St. Maarten in the wake of the devastating Hurricane Irma seem to be redundant as agreements are already in place covering these areas.
Prime Minister William Marlin and Justice Minister Rafael Boasman both elaborated on the agreements that are in place during a press conference on Monday.
At that press conference, when asked Marlin said the Government of St. Maarten has a Plan B in place, but hastened to say “we won’t have a public discussion on Plan B now. I don’t think a Plan B would be necessary. We believe that reason has to prevail in Holland. I can’t imagine that the Dutch government will continue to insist that if they don’t get control of the Integrity Chamber that they won’t release the aid to St. Maarten. I can’t imagine Holland telling the international community that. If there is a bundle of crooks in government then lock them up; prosecute them and lock them up.”

Existing agreements on border control
Boasman said while the Dutch government, as part of its conditions to release aid, wants to establish a binding agreement that border control in St. Maarten will be executed by the Marechaussees and the Dutch customs, there already is a binding agreement with not only the Dutch Government, but also the governments of Curaçao and Aruba covering this matter.
“The four countries in the kingdom have a binding agreement in which cooperation and input of the Royal Marechaussees is already taking place,” Boasman said. “The difference here (in the conditions) is that it is stated that the border control will be executed by the Royal Marechaussees – meaning that they would have the lead and they would do that independently of any other agencies, which is not the case at present.”
Boasman said also that no mention is made of local law enforcement agencies, just the Dutch Customs and the Marechaussees. He said St. Maarten currently enjoys “a very good” working relationship with the Royal Marechaussees, whom is said, is welcomed to the country and whose support to local law enforcement is “appreciated.”
The cooperation with the Marechaussees dates back to the former Netherlands Antilles. The first protocol was entered into in 2004 and since 2008, 43 Marechaussees were made available to the former Netherlands Antilles as Full Time Employees (FTEs). They are referred to as the “flex pool.”
The cooperation continued after St. Maarten obtained its new constitutional status on October 10, 2010, and a protocol was signed with the Dutch and Curaçao Governments in January 2010, after one of the bi-annual meetings of the four justice ministers in the Kingdom JVO. That protocol ran from January 2011 to June 2015, and it covered areas such as border control, immigration and control of drugs at borders, combating migration, drugs and violent crimes – the same issues covered in the conditions set by the Dutch Government for aid. The protocol was evaluated by a Dutch group contracted by now caretaker Minister of Kingdom Relations and the Interior Ronald Plaserk, and an evaluation report dated March 8, 2013 was compiled.
In 2014, an agreement was signed to extend the “flex pool” of Marechaussees from July 1, 2015 to December 31, 2019, and the support was expanded to include Aruba. “At present, we have a valid protocol – a valid agreement – among all four countries in the Kingdom on the participation of the Royal Marechaussees as far as border control is concerned,” Boasman said. “And, it is still valid for at least two more years,” Boasman added, noting that the condition set by the Dutch government is “directly contrary to that valid protocol.”
Boasman also highlighted several instances where Plasterk himself made reference to the binding agreements involving the Marechaussees and even referred to the benefits of their work in border control in St. Maarten and in the combating of violent crimes, immigration control, combating of human smuggling and human trafficking and combating of drug trafficking at Princess Juliana International Airport SXM.
The existing protocol on border control stipulates that additions or amendments by the signatory countries will take place at the JVO, the next of which will be held in mid-January, 2018, in Curaçao and not “via giving recovery aid to St. Maarten.”
According to Boasman, just before the hurricane proposals were made at a JVO conference held at the Westin St. Maarten Dawn Beach Resort and Spa that the functioning of the flex pool of Royal Marechaussees should be reprioritized to focus more on border control and this will be done.
He told The Daily Herald after the press conference that the about half of the 20 Marechaussees currently operating in St. Maarten are dedicated to border control, while the remaining are split between the Special Robbery Unit and Intelligence. The intention is to transition those that are not working with border control to work in this area in keeping with the decision at the last JVO.
He applauded the work being done by the Marechaussees indicating “the work that is being done is fantastic… As Minister of Justice, I am very proud of the cooperation that we all can see… so you can imagine my astonishment when I learnt that border control was one of the conditions for St. Maarten to be able to receive aid from the Netherlands… I would not want to believe that the minister who said that [does not – Ed.] realise the serious participation and serious work that the Marechaussees is doing in border control. Could we do more? Yes. That’s why we have the protocol and that’s why we agreed to reprioritize… Where the problem is with border control, that it is, all of a sudden set as a condition that the Marechaussees take over border control of St. Maarten is a mystery to me,” he said adding that at no time was there any discussions of malfunctioning of the border for this to be presented as an issue now.

Integrity chamber
Marlin said prior to Hurricane Irma St. Maarten was on track to establish the Integrity Chamber according to the conditions stipulated by the ruling of the Council of State, to which St. Maarten took its dispute with the Dutch Government on this matter.
While Plasterk continues to refer to the 2015 agreement regarding the Integrity Chamber, which he wants enforced as one of the conditions to receive aid, part of this was struck down by the Constitutional Court. St. Maarten has since taken its case to the Council of State, which held a hearing on July 6.
The Council of State ruled that there will be no quarter master, no political consultations; that civil servants at a high level will have consultations; parties will have to take into account the ruling of St. Maarten’s Constitutional Court and St. Maarten will promote that the draft will be in parliament and established no later than October 31.
Marlin said consultations did take place and the draft Integrity Chamber law was presented to the Council of Ministers and approved on August 31. It was immediately sent to the Governor to forward to the Council of Advice. This was done on September 3. By September 5, the country was shut down, in preparation for Hurricane Irma, which wreaked havoc on the island on September 6.
“We are on track to establish the integrity chamber. Just like with Justice, there is an agreement because we went with the dispute to the Council of State, who gave a ruling and St. Maarten is abiding by that ruling, and out of left field comes the argument by Plasterk that an Integrity Chamber must be accepted the way he wants and if it’s not accepted there will be no money,” Marlin said. “If that is not blackmailing and holding the people of St. Maarten hostage and forcing the people of St. Maarten to rebel [I don’t know what is – Ed.]. This is what the ultimate goal is – tell people there’s a bag of money waiting to come your way and there is that gang in St. Maarten preventing that from happening and force the people of St. Maarten to take to the streets to force the government to agree to something that is already in motion.”
Regarding appointments to the Chamber, he said the Netherlands insists on appointing the Chairperson of the Chamber and the Kingdom Government wants to appoint two persons and St. Maarten one. St. Maarten proposes to make the Integrity Chamber one of the country’s high councils of state. Politicians will not be appointing the members of the chamber. The proposal from St. Maarten is for the nominations to come from the Court of First Instance; Audit Chamber and the Ombudsman.
Regarding allegations that he is blocking aid for St. Maarten, the Prime Minister said this is not the case. “I would be crazy to block aid for the people of St. Maarten. There are people who have losing their jobs, are homeless and have no roofs and I would be crazy to even walk in the community when I am preventing aid to come to them.”
Marlin said while some may consider the matter frivolous and would want to say why not give in to get the aid, the correct process has to be followed. He said also that it is not right that because St. Maarten is hit by “a category 7 hurricane,” this should be used to bring the country to its knees. Marlin believes Plaserk is holding the people of St. Maarten hostage. “We need to take stock on what is being done to us as a people rather than looking blindly that there is a bag of money.”
St. Maarten will allow the Dutch Audit Chamber to audit any institution that receives financial aid. “Let the audit chamber audit that paper trail and if something goes wrong deal with it.”
He said the country has never refused it. “It’s not that St. Maarten is rejecting aid. St, Maarten is saying aid yes, but Holland please revisit your conditions.”