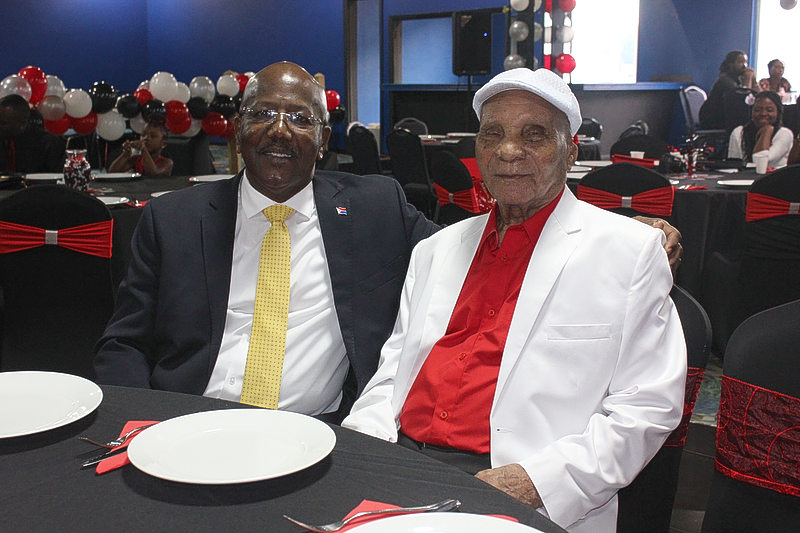 Marlin said York was a century and not out, until a few days later, when he was caught with a leg spin by death. He said York had been in good spirits when many persons came together to celebrate his 100th birthday. “I was fortunate to be part of the celebration, both in church and at the Tropicana Ballroom. It is therefore with utter disbelief that I received the news of his passing,” Marlin said in a press release on Friday.

“I recall mentioning on the day he turned 100, two personal experiences with him which have followed me ever since. The first was going whelking with him and the late Amos Richardson many rains ago. We used to walk from Middle Region to Oyster Bay on the reefs where the Westin Resort and Spa is now located. Anyone who knew Mr. Freddy York would know that such a distance was really a short stroll for him. Looking back at those days, I think they may have allowed me to tag along with them so I could carry their bag. Whatever the reasons may have been, I count myself lucky to have had the opportunity to share the same space and joy with them.”

He said the whelking lessons were for him an excuse to be in the presence of two wise, older St. Maarteners who had a singular and contagious joie de vivre. “In more recent times, I had once stopped to offer Freddy a ride when I came across him on one of his daily walks. He was going back home from town. As I pulled up the car next to him, he looked at me and said, ‘young man, you are taking me off my routine, but I won’t disrespect you.’ He then hopped into the car and I drove him home.”

Marlin continued: “I am sure many other people, whose lives he impacted in his simple, quiet way, would tell of their own memories of him, whether as a seasoned, and avid domino player or as one who loved to tell jokes. But, at times like these we are usually lost for words.”

Marlin said York will always be remembered for his simplicity and his discipline, for it takes tremendous discipline to exercise as he did daily, and his immense sense of humour.

“To all the entire York family, and in particular, to Henrietta Doran-York, our Minister Plenipotentiary in The Hague, and to all the children, grandchildren, great-grandchildren and great, great grandchildren, and the relatives and friends he left behind, please accept heartfelt condolences from my wife Gabrielle and me and our family as well as on behalf of the Government and people of St. Maarten. We pray that you will find strength and comfort in your faith during this time of grief. May his soul rest in eternal peace.”

In a separate press release issued on Thursday, Jacobs also expressed sadness at York’s passing. “Our heart goes out to you in this time of bereavement with special recognition to our Minister Plenipotentiary Mrs. Henrietta Doran-York as well as MECYS’ Culture Department head Mr. Neville York as you accept this terrible loss.”

She said death is never easy to accept for the living, but allow the memories to live on forever. “Mr. Freddy York recently celebrated a milestone of 100 years of living, which is a legacy many of us may not get to experience. I am happy, as I know his family is as well, to be privileged to have celebrated this milestone with him. The celebratory ceremonies held over the weekend were filled with laughter and joy, which when remembered, will sustain you during this time of preparation for farewell and beyond. My prayers are with the family and friends; may God guide you and give you strength through the trying times ahead and may his soul rest in perpetual peace.”

She said York had been a pillar in the community and his legacy will live on forever. “The stories of him fishing and picking whelks will live on through his children, grandchildren and great grandchildren, and all who were privileged to have learned from him, for years to come. His sense of humour, love of life, playing dominoes, eating and resting well while working and spending time with family and friends are examples for all of us to live by. May St. Maarten’s cultural icon, Freddy York, live on in our memories forever.”