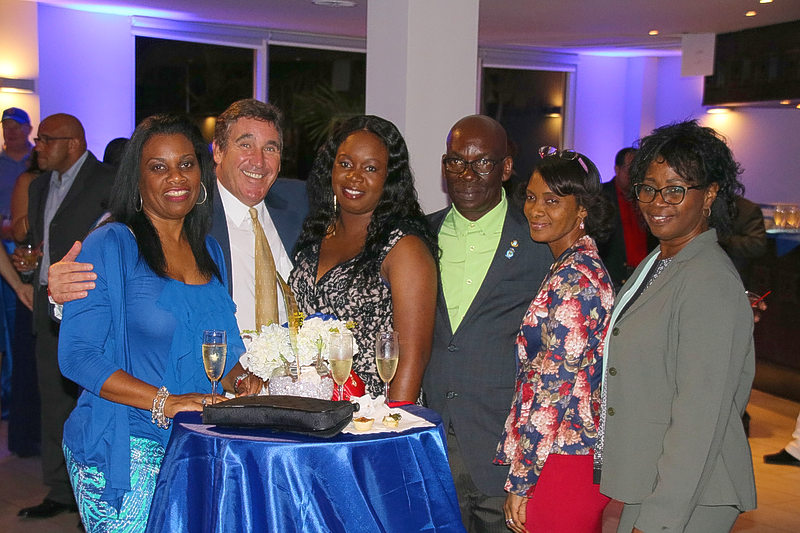 Governor Eugene Holiday, Prime Minister William Marlin and Member of Parliament Theo Heyliger were among the guests at the event.

Managing Director Michael Cleaver said that thanks to the assistance of the entire Winair team, the company had been able to achieve many goals such as the expansion of its route network, expansion of the fleet and the upgrading of its facility and staff.

Cleaver also shed light on what is to come for the company next year. “A new web page and international booking engine which will be updated to be clearer and will focus on ease of use for our customers. The new web page will be updated and will offer such features as accepting bookings from all platforms, desktop, iPhones and Android, etc.,” he said.

Winair has already started its ground-handling. The company has been awarded a second ramp-handling concession to operate at Princess Juliana International Airport SXM. The company will also complete a code-share agreement with KLM providing seamless travel on both KLM and Winair route networks offering fares, baggage check, passenger check-in and marketing of each other’s products in the markets they serve in, according to Cleaver.

Former Winair managing director Governor Eugene Holiday spoke about the time he had worked at the company and congratulated the management and board for making the company successful.

“Fifty-five years of providing safe airline services to St. Maarten and the surrounding islands is a major feat in the often challenging, complex and competitive aviation business. It seems like yesterday that I addressed the crowd at Winair’s 35th anniversary celebration. In preparing this speech I dove into my archives and came across some pictures and thought where did my hair go?” he added.

Established in 1961 as Windward Islands Airways, Winair has since safely navigated the surrounding airspaces, transporting millions of passengers, residents and tourists throughout the Northeastern Caribbean ranging from Guadeloupe to the south of St. Maarten to Puerto Rico to the West.

Holiday also said, “During the past 55 years the company has evolved from a private to a Government-owned company; provided vital air connections between St. Maarten, St. Eustatius and Saba; survived the oil crisis of the 1970s; helped facilitate the tourism and economic boom in St. Maarten of the 1970s and 1980s; prevailed over the devastating impact of Hurricane Luis of 1995; adapted to the ever-changing aviation standards to secure safe transportation services; endured the major shock to aviation and the world economy as a result of the 911 terrorist attacks of 2001, and throughout this period developed into the second largest passenger carrier and vital player at Princes Juliana International Airport SXM.”

Prime Minister Marlin had a different spin to measure the company’s success. “Winair does not only take you there, it takes pizza there too. I understand the airline has the world record for delivering pizza to five different international destinations in under an hour. This is not the only thing that sets Winair aside. The company can be considered de facto St. Maarten’s national airline even though it may not have been treated as such always.

“For the last 55 years, Winair has been able to navigate these sometimes treacherous headwinds that have pulled down several regional airlines into bankruptcy and oblivion. The airline, our airline, Winair has not only been able to stay alive but, as I have been made to understand as shareholder’s representative, it is doing well, thank you.

“It has been a remarkable turnaround from a debt-ridden company to a financially solvent airline. This accomplishment has only been possible due to the team effort of the Supervisory Board, the management and especially the hard work and dedication of the employees as well as all Winair’s partners and customers in the region.

“With the legendary reputation of its pilots, the innovative leadership of its management and the exemplary dedication of all its employees, the next 55 years for Winair promise to be exciting and positive as the airline adapts to the fast-changing world of modern aviation in which regional airlines will remain an indispensable part of expanding air transportation.”