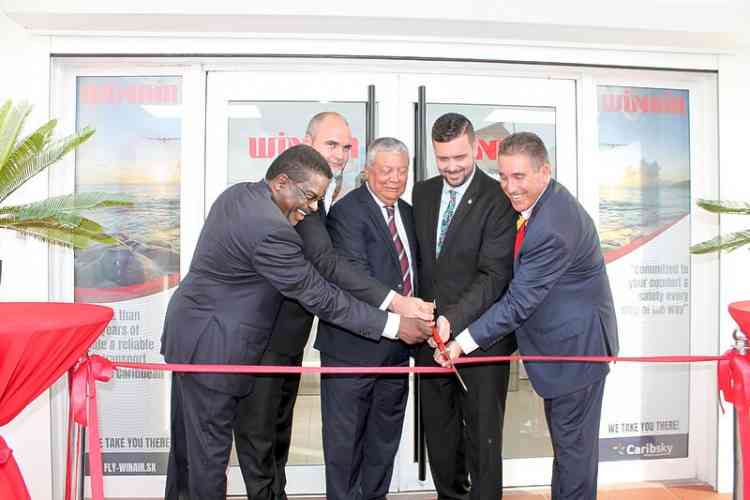 There were a number of speeches to mark the occasion and a tour of the reception building for invited guests. Creation of more parking spots for customers is one of the features of the new offices. The airline’s buildings out of view at the rear have also been reconstructed.

Congratulatory remarks were made by Minister of Tourism Stuart Johnson and Netherlands representative in St. Maarten, Chris Johnson.

“Despite the devastation of Hurricane Irma, WINAIR quickly opened an office in Philipsburg, and in days their planes were flying again,” he reminded. “Through determination and commitment of its hard-working employees, WINAIR has shown great things can be achieved from disasters. This airline is the pride and joy of St. Maarten. While other airlines struggle to meet demand WINAIR continues to expand. This airline is known for credibility and dependability despite the competition. To management and employees, job well done and I urge you to continue improving standards and service.”

Said Chris Johnson: “WINAIR is not only an airline for tourists, it is a lifeline for many people in the Northeast Caribbean. It reminds about connectivity and how vital that is for people in the small islands. On behalf of the Netherlands when we look to the residents of Saba and Statia, we say thank you to WINAIR for keeping those people connected. When you think about how Saba was in 1962, it was WINAIR that brought new life to Saba.”

Chairman and Director of the WINAIR supervisory board Georges Gréaux, Jr. gave an interesting historical perspective of the events leading up to the founding of the airline in 1961 by his father, Captain Georges Gréaux, Sr., Captain Faustin Ledeé and Norman Chester Wathey.

“These men are living monuments and historians. Whenever you see them, pick their brains because they have a lot of stories to tell,” he said.

President and CEO of WINAIR Michael Cleaver thanked management and employees for their efforts, patience, and can-do attitude over the past 18 months.

“I’m very proud to be leading such a team.” he said.

He thanked all the companies who participated in the reconstruction project, and also thanked Sarah Wescot-Williams and Michael Ferrier, who in 2010 were charged with restructuring the airline. The three founders he described as “visionaries”, thanking them for their pioneering spirit in creating WINAIR.

Cleaver also recognized Chief Financial Officer Roberto Gibbs whose financial skills ensured the wellbeing of the airline not only during the past 18 months, but over the past five years, and Edwin Hodge who worked with the contactors to complete the project, and of course, the customers for their loyalty and patronage.

Father Adam gave a blessing before the ribbon cutting. Michael Cleaver then led guests on a tour of the building.