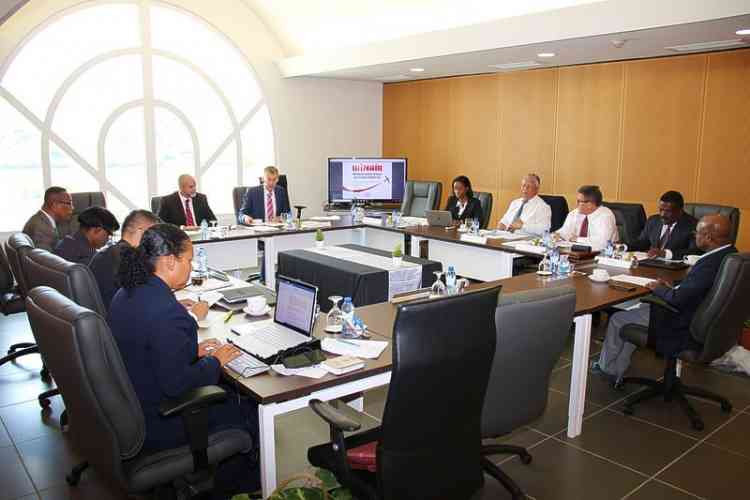 POND ISLAND–Windward Islands Airways International Winair held its annual general meeting of shareholders in the Council of Ministers meeting hall on Thursday, August 22. The purpose of the meeting was to review the 2018 fiscal year financial results.

Representing Winair were the airline’s executive board, consisting of chief executive officer (CEO) and President Michael Cleaver, chief financial officer (CFO) and Vice-President Roberto Gibbs, supervisory board of directors Robert Budike and Georges Gréaux (who also chaired the meeting), and legal secretary Melinda Hoeve, who acted as minutes taker on behalf of Winair. Supervisory board of directors member Hans de Jong is currently on leave and was not able to attend.

During the meeting it was said that unlike fiscal year 2017 – in which heavy losses were incurred in the last quarter due to Hurricane Irma – Winair turned a profit of US $850,000 in 2018. This was well ahead of its budget for that year, which initially did not have such a positive outlook, according to a press release.

Staffing has also returned to near pre-Irma levels, with 126 persons employed by the airline. This is a clear indicator of the company’s resiliency to come back stronger in the shortest time possible, said the press release.

Other achievements in 2018 that were highlighted in the meeting were the handling of insurance claims, rebuilding the headquarters and hangar facilities, streamlining the temporary office space and reservations centre, executing new routes and expanding on existing ones, completing audits with partner airlines and civil aviation, and performing training of flight crew, ground personnel and passenger handling staff.

Going forward, the airline said it would continue to forge its relationship with Air Antilles with the codeshare and ATR aircraft lease programme. It is also waiting for Leeward Islands Air Transport (LIAT) to activate a codeshare programme which will bring the Caribsky programme full circle to the benefit of the regional traveling public.

Winair said it had been researching using faster and larger aircraft, in addition to its current fleet of DH6 Twin Otters and ATR42/72, to serve its longer routes more effectively, and would present its plans to shareholders when ready. Meanwhile, the company has conducted a passenger service self-assessment to improve in areas requiring attention.

“We know it will never be perfect, but we strive to at least try and give our customers the best possible, near perfect travel experience,” said Gréaux.