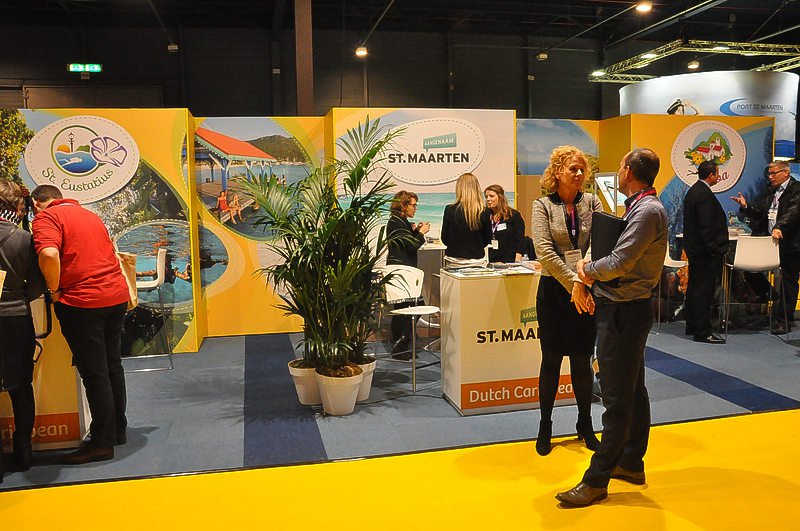 UTRECHT–For the second time in a row St. Maarten, St. Eustatius and Saba are uniting forces at the annual Holiday Fair (“Vakantiebeurs”) in Utrecht this entire week. With a combined, large booth, the three Windward Islands aim to get more attention of visitors to Europe’s largest tourism trade fair.

Last year’s move to have a joint booth proved successful: the three in a row booth structure painted in bright colours drew in more visitors than the previous concept with three separate booths. The St. Maarten Harbour and SXM Airport had their own, very large booth, for the first time together at the Vakantiebeurs (See related article).

At the combined Windward Islands booth, set up by TVC Advertising of the Netherlands, St. Maarten was represented for the first time by its new tourism bureau for the Netherlands, Belgium and Luxembourg, marketing agency Aviareps. There were no direct representatives of the St. Maarten Tourist Office in Philipsburg as was the case last year.

St. Eustatius and Saba were represented by their local tourist offices, Teena Lopes of the Statia Tourism Development Foundation and Glenn Holm of the Saba Tourist Bureau, as well as Saba Commissioner in charge of tourism Bruce Zagers. Lopes and Holm are regulars at the Vakantiebeurs, but for Zagers it was the first time. “Impressive. This is a massive fair,” said Zagers.

Representatives at the combined Windward Islands booth were all satisfied with the continued concept of joining forces. “We benefit greatly from our participation at the Vakantiebeurs and also from being together with St. Maarten and Saba. We can refer interested people to each other. Sticking together can only benefit us all,” said Teena Lopes of the St. Eustatius Tourism Development Foundation, who has been coming to the Vakantiebeurs for several years.

Holm applauded the continued cooperation with St. Maarten and St. Eustatius at the Vakantiebeurs. “We are getting a lot of inquiries about combined Windward Islands trips, and being together here makes it easy to refer,” said Holm. “We strengthen each other by promoting our destinations together,” said Marlon Klein of Aviareps.

All three Windward Islands were positive about the outlook for 2017 and anticipated higher visitor figures. Klein of Aviareps said the fact that St. Maarten was again being actively promoted in the Netherlands after an absence of almost three years alone should result in increased visitor numbers from the Netherlands. “St. Maarten is back and the people are glad for that,” added Klein’s colleague Britt Nys, Aviareps representative in Belgium.

Aviareps, which became St. Maarten’s tourism office representative in September last year, will be focusing in the coming months to put the island back on the map in the Netherlands with a so-called business to consumer marketing campaign and to increase the branding and awareness of St. Maarten. Press releases will be distributed and press trips as well as familiarisation trips for travel agents organised in 2017. “We are now busy to launch the campaigns in a cross media format,” said Klein.

Aviareps is focusing on St. Maarten’s diversity: the culinary aspect, a romantic vacation, the beaches, a family destination and water sports. Island hopping is also included in the promotion.

Saba is focusing on the execution of its Tourism Action Plan. Efforts to attract more visitors from St. Barths are paying off with the direct weekly Winair flight from St. Barths to Saba, said Commissioner Zagers. “St. Barths is a good market for us. These are mostly high-end tourists and they spend a lot. We offer a nice getaway for them; also for St. Maarten.”

Zagers is hopeful that the renovation of the airport terminal will start this year and also that clearance will be given by Dutch authorities for the landing of commercial helicopter flights which would make it possible to bring in tourists by helicopter.

Saba is further working on increasing the number of yacht moorings to 30, including two moorings for mega yachts. The Saba Government has also put in a request to allow Winair to take off 15 minutes after sunset, something which is possible with the runway lights being in place. The nature trails are constantly upgraded and there are plans for a Botanical Garden next to the museum.

Saba is putting quality over quantity, emphasized Glenn Holm. Overall, things are looking good for tourism. “We have a demand for rooms. More people know about Saba in the Netherlands. We actually have people coming over just to climb the Mount Scenery as the highest point of the Netherlands. Some people take a flight to Saba to experience the landing and take-off.”

The Saba booth displayed a number of new brochures in the Dutch, English and French language for day trippers, as well as promotional material for Sea Saba, Saba Free Diving, and the two ferry services offered by The Edge and Dawn II.

Teena Lopes explained that the St. Eustatius Tourism Development Foundation this year would continue its Tourism Awareness Programme with a different related theme every month. By working together with the different organisations on the island, the tourist office wants to increase the awareness for tourism.

Also continued this year will be the Statia Taste of the Cultures, a monthly event held every last Thursday where the different nationalities on the island are displayed. Tourists very much like this event, as do the locals, said Lopes.

The Statia tourist office will work more closely with the youth and schools to raise more awareness for tourism. “It is important to involve the youth, make them feel part of tourism. Being involved creates a positive atmosphere and encourages the youth to share,” said Lopes.

Statia has high hopes of the possibilities being studied to establish a fast ferry between the Windward Islands. A fast ferry would greatly benefit Statia which has been without permanent ferry service with the Waterman being out of commission. Lopes said that the Winair flights were almost always full and that the airfare was too high for many people.

The St. Eustatius Tourism Development Foundation and TVC Advertising have created a new website, www.statia-tourism.com. Social media is used as well to promote the island, for example, through Facebook and Twitter.

TVC Advertising has not only arranged the combined Windward Islands booth, but has also taken care of the promotional material for Statia and Saba. New, colourful brochures and other promotional material are being dispersed at the Vakantiebeurs to attract more visitors. This year again, St. Maarten, St. Eustatius and Saba supplied a joint promotional canvas bag, purple this time.