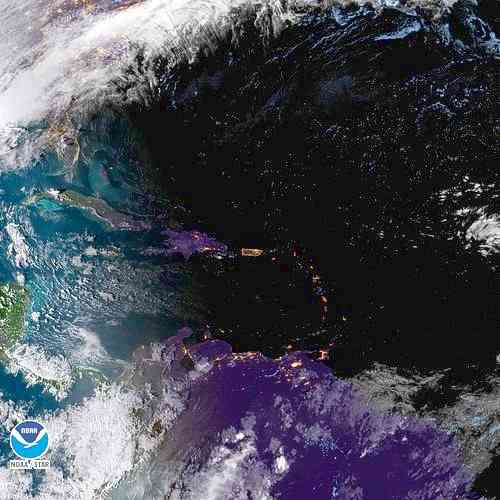 AIRPORT–Everyday conversations and social media posts have been rife with comments about what appear to be abnormally heavy winds in the past weeks. The winds have continued to fray the already stressed nerves of the island’s Hurricane Irma survivors. However, there is some slight relief in sight, says the Meteorological Department.

Met Office Head Joseph Isaac told The Daily Herald weather models indicate winds will relax slightly by Thursday and pick up once more during the weekend into early next week.
Residents “should be aware of the dynamics in weather, which means the atmosphere is continuously changing. Therefore, keeping informed and updated is of paramount importance,” Isaac said, calling for attention to be paid to the forecasts issued by the Department three times a day.

Windy conditions across the region during the last months and weeks are a result of the Bermuda-Azores High, a semi-permanent, subtropical area of high pressure in the Northern Atlantic Ocean. The high-pressure area migrates East or West throughout the year and varies in central pressure. From July to October, it moves West and the centre is located near Bermuda, thus the title “Bermuda High Pressure System.” From November to April, it is centred near the Azores Islands in the Eastern Atlantic giving raise to the name “Azores High.”

Over the past week the Bermuda-Azores High has been “very strong” and has varied between 1,030 and 1,044 millibars daily. This has resulted in windy conditions across St. Maarten and across the Eastern Caribbean.

Daily average wind speeds recorded at the airport during the past week have ranged from 17 to 23 miles per hour with higher gusts at times.
Isaac said people living at higher elevations will experience stronger winds speeds. These strong winds also have a direct effect on local sea conditions, prompting the Met Office to issue advisories and warnings for small craft as necessary.

The Bermuda/Azores High is part of the North Atlantic Oscillation (NAO) where low pressure is generally located over Greenland (Icelandic Low), while an area of high pressure is located farther South in the central North Atlantic (Bermuda-Azores High). The strengths and positions of these systems vary from year to year and the differences between the two influence the strength of the winters in Europe and the United States as well as the trade winds across the Atlantic.

Based on observations from the Climate Prediction Center from October 17, 2017, to February 13, 2018, the mean value of the NAO index has remained in the positive phase from about mid-December. Isaac said this means that the Bermuda-Azores High has been stronger than normal. consequently bringing stronger trade winds across the region.
The Global Forecast System (GFS) 14-day forecasts of the daily NAO index for the next few days will remain positive and weaken towards the end of the period. This means that trade winds will remain strong across the region and then weaken, he added.