Home Local News Winner of TelCell “I Am Carnival” motor car prize to be announced... 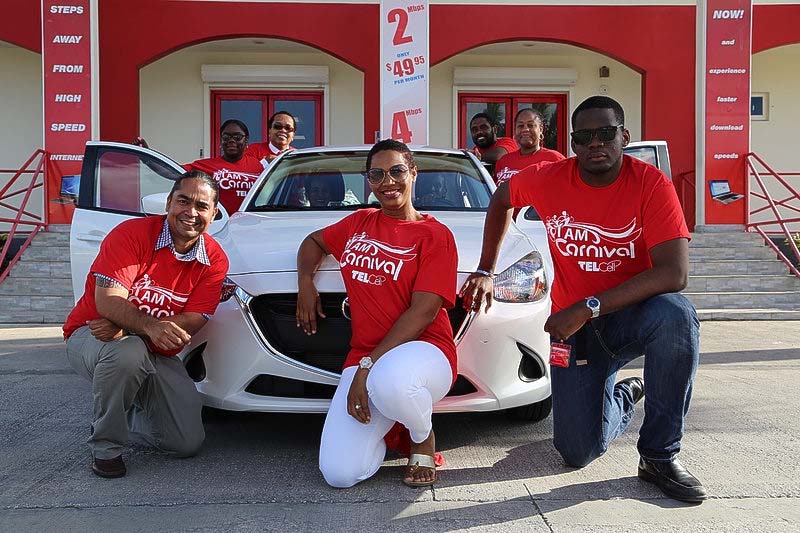 “I Am Carnival” Campaign Coordinator, Grisha Marten (Center) says everyone is excited to find out who will be driving home in a brand new Mazda2 Sedan motor car as the winning prize of the TelCell I Am Carnival promotion which ends Tuesday.

Pond Island – A brand new Mazda Sedan 2 motor car is the first prize in TelCell’s I Am Carnival SMS promotion which officially comes to an end at 4:00 pm, Tuesday May 3.

The winner will be the TelCell subscriber who sent the most SMS messages during the promotion, to claim the top prize.

Six other winners will also be chosen, based on the number of texts they also sent.

Included in the list of other prizes are: a 55″ Flat Screen TV, HP  Laptop, iPad Air, Samsung S6, iPhone 6s and a iPhone 6s Plus.

TelCell says the winners will be announced by phone number only just before the burning of King Momo on Tuesday night, and contest organizers are asking everyone who entered the contest to be present for the official announcements.

A St. Maarten-based Notary will also be present to notarize each phone number assigned to the prizes, also on the Tuesday night.

TelCell takes this opportunity to thank everyone who entered the SMS promotion for a chance to win these outstanding prizes and bring a rewarding end to its carnival campaign 2016.

Source: Daily Herald
Winner of TelCell “I Am Carnival” motor car prize to be announced Tuesday