Home Local News WITU to give school board ultimatum to pay allowance | THE DAILY... 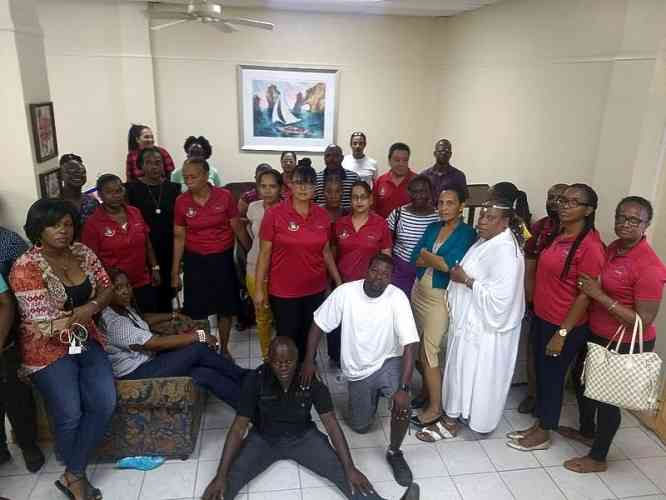 Some Academy teachers at the PSVE campus on Monday.

~ Duncan to meet teachers on Monday ~

EBENEZER–Windward Islands Teachers Union (WITU) will be giving Foundation for Academic and Vocational Education (FAVE) an ultimatum to pay the 2019 vacation allowance to teachers of the two St. Maarten Academy schools during the second half of this month.

WITU President Claire Elshot, who met with Academy teachers on the issue on Friday, will be drafting the letter and sending it out electronically to the FAVE board today, Saturday. Elshot said teachers are entitled to the vacation allowance and it must be paid to them.

In the meantime, FAVE Chairperson Roland Duncan informed teachers via PSVE Principal Lavern Nelson on Friday that he will be meeting with them at 11:00am Monday on the issue of vacation allowance and measures to be taken in connection with the reduction of subsidy. It was made clear in the letter that staff who have not worked in recent days will not be paid for the time that they did not work.

“The principle of ‘no work, no pay’ will be applied. This will be reflected in their pay at the end of this month,” Nelson told teachers in a written correspondence. “Staff on strike should immediately resume their work, as further strike action will be considered dereliction of duty and cause further disciplinary measures to be taken.”

Teachers have maintained that their action is a sit-in, not a strike. Teachers also maintain that while FAVE wants to apply a “no work, no pay” rule, their position is “no (vacation) pay, no work”.

In the meantime, teachers of both campuses met from around noon for more than an hour on Friday to discuss the issue. During this meeting, teachers came up with a number of strategies that will be employed. They declined to divulge the details of the strategies.

Several teachers who are on contract also received an email on Friday summoning them to Human Resources to pick up a letter from the board. The letter they received informed them that their contracts, which end on July 31, will not be renewed. The letter was dated June 4, but nothing was communicated to teachers before.

Following their meeting, teachers met with their union on Friday afternoon. Elshot told The Daily Herald last night that during her meeting with teachers she had been updated on what had transpired over the past days with respect to the vacation allowance payment. Also discussed were comments made by Duncan that he is seriously considering closing Academy PSVE, and the correspondence teachers received from Duncan via Nelson on Friday.

“We (WITU) will give an ultimatum in writing to the board, because the board has not contacted the union and informed the union of anything even though I had sent a letter asking about the vacation allowance. I have not received any correspondence or answer. We are also planning to address Parliament on the seriousness of this issue,” Elshot said.

PSVE section teachers have been on a sit-in from earlier this week and Academic section teachers subsequently joined in a go-slow action over uncertainties regarding the payment of the 2019 vacation allowance.