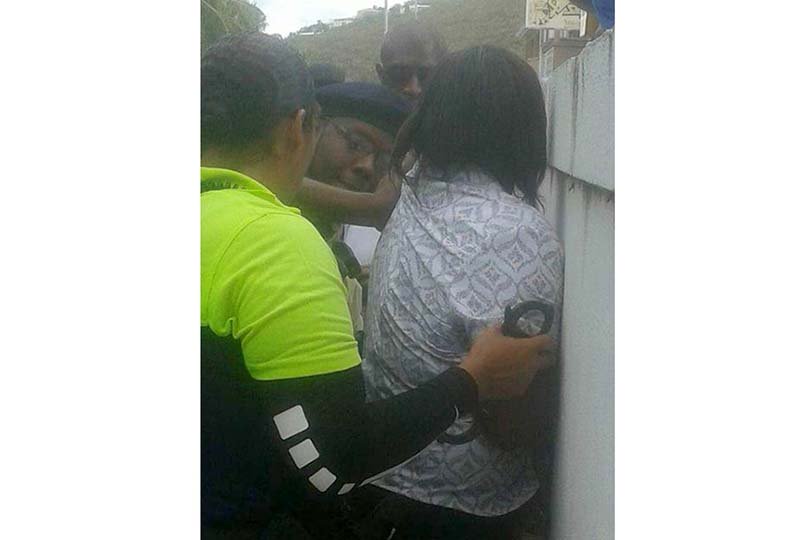 The woman being restrained by police.

PHILIPSBURG–A police patrol noticed an SUV driving on A.Th. Illidge Road with outdated licence plates on Wednesday morning. The patrol followed this vehicle and directed the driver several times to stop, but she refused.

According to police spokesman Chief Inspector Ricardo Henson, she continued driving with the intention to get away from police. Close to the junction at Prins Bernhard Bridge, the driver was blocked by another patrol forcing the car to come to a halt.

The vehicle with the 2016 licence plates.

The patrol approached the woman and requested that she exit the vehicle which she again refused. A tow truck was sent to the scene to have this vehicle towed while she stayed inside of the vehicle.

The driver continued refusing to exit the vehicle. The patrol decided to have this woman removed from the vehicle using the necessary force. At the time, the patrol did not know her identity.

“After the driver was removed from the vehicle, she continued to resist restraint. This is when the patrol was informed by onlookers and bystanders that the person in question was a doctor with initials A.A. and that she is suffering from mental illness,” stated Henson.

The woman continued to resist heavily and had to be restrained by the patrol using the necessary force, to be taken to St. Maarten Medical Center to get the necessary medical attention.