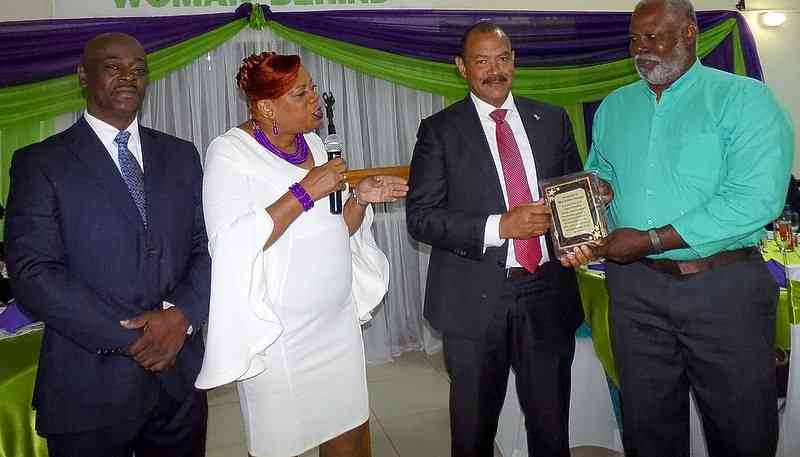 ST. EUSTATIUS–Arlene Cuvalay-Halbert was honoured with the Ingrid Whitfield Women of Honour Award for women who have done an outstanding job within and for the community. The award was handed out on International Women’s Day.

Ingrid Whitfield, the person after whom the Award was named, listed a few of Cuvalay’s achievements. Whitfield said that Cuvalay first started her business out of her car selling Avon and other items, and she later grew her business into a store, not only with perfumes, but clothes and other accessories as well.

Over the years, she progressed and her business grew after she became an agent of NAGICO Insurance Company. She then branched out into the rental business with her company ARC Agency, where she started with a few rental cars. Today she can showcase a fleet of luxury vehicles, which includes trucks, cars and SUV’s.

Her achievements also include many charitable activities. For many years, she and her husband, the late Raymond Cuvalay, organized a Christmas event for children.

After she and her husband decided to retire so they could spend more time with each other, they decided to also pursue their lifelong dream to open a casino on St. Eustatius. As fate would have it, her husband passed away in 2017, before their dream could become a reality.

Being an entrepreneur, Cuvalay decided to pursue her and her husband’s dream by herself. “Unfortunately, her husband is not here to see it, but Statia now has a casino. She pressed on and made sure her husband’s dream, and her dream as well, became a reality,” said Whitfield.

Cuvalay also assisted many persons in the community and donated a vehicle to the district nurses.

Cuvalay was unable to be present at the ceremony. Her nephew-in-law Evern “Fonso” Cuvalay accepted the award on her behalf.

Cuvalay thanked the Committee on his aunt’s behalf for having chosen her for such a prestigious award.