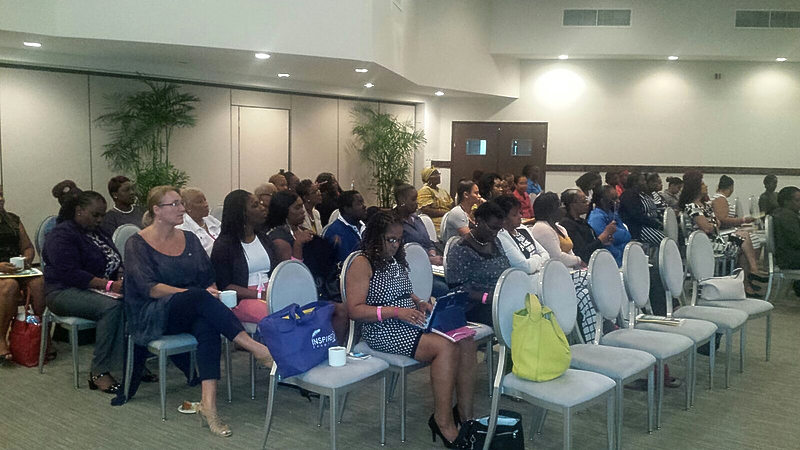 A section of attendees at the conference.

PHILIPSBURG–The topic of the economic empowerment of women in the changing world of work was dissected at a conference hosted by the Windward Islands Teachers Union’s (WITU’s) Status of Women’s Committee at the Sonesta Great Bay Beach Hotel last Thursday and Friday.

During the opening ceremony, WITU President Claire Elshot-Aventurin assured participants that their valuable contribution to the event will be part of important discussions, and noted that regional body Education International (EI) will critically look at the link between the rights to education and the challenges faced with the implementation of the Millennium Development Goals (MDGs) for women and girls.

She said also that a number of great women of St. Maarten, who are no longer with us, have made their contributions and have let their voices be heard at similar events at the UN Headquarters and in Beijing 2000, setting the tone for a number of rights and privileges women enjoy today. “It is therefore our task to continue their legacy that they have left behind,” she said.

Secretary General of the Education Ministry Jorien Wuite, who spoke on behalf of Education Minister Silveria Jacobs, said the Minister had been deeply honoured as the sole female in the Council of Ministers to be given the opportunity to address attendees as positive strong women.

Topics discussed during the two days included “The Changing World of Work,” by WITU Vice President Corinne Lejuez-van Putten and an English teacher; “Women’s Economic Empowerment – Stand Up for Somebody’s Right Today,” by President of the St. Maarten Seniors and Pensioners Association (SMSPA) Raymond Jessurun; “Having a job is not enough…..too much work women do is undervalued” by Former General Secretary of the Caribbean Union of Teachers (CUT) and former liaison officer of EI in the Caribbean Dr. Virginia Albert-Poyotte of St. Lucia and “Gender stereotypes in the Media” by public education teacher Melissa Fleming.

Other topics included “Going back to the future for decent work and quality public services” by teacher and entrepreneur Anenda Zaandam; presentation by St. Maarten Youth Parliament on “Economic Empowerment of girls in the changing world of work”; “Challenges and achievements in the implementation of the MDGs” by Labour and Health Ministry official Rose Fleming and “Women’s Empowerment and its Link to Sustainable Development,” by University of St. Martin Dean Genève Philip-Durham.

WITU said the event was “not just another conference,” as several persons said they would like to see this become an annual event. She noted that participants “are also eagerly awaiting to be part of the follow up and to receive the conclusions on the way forward with networking on several levels within the region and internationally.”

Elshot thanked everyone who was involved in making the event a success.

From left: WITU President Claire Elshot and a union representative at the conference.

Themed “Women’s Economic Empowerment in the Changing World of Work,” the conference attracted delegates from the Status of Women’s Committees of the Caribbean Union of Teachers ( CUT) from Bermuda, Barbados, Bahamas, Guadeloupe and French St. Martin.