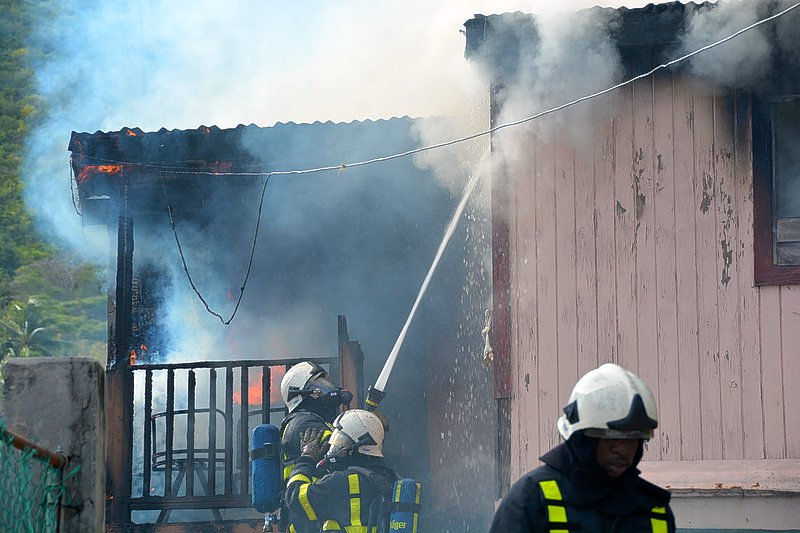 CUL DE SAC–Fire Department officials are investigating the remains of a home on Dollison Drive that burned down on Tuesday afternoon.

The homeowner and a child who were in the house managed to escape from the blaze before the fire spread throughout the structure. Fire fighters also managed to save the homes surrounding the burning house.

Fire Department Officer on duty Tony Gibs told The Daily Herald on Tuesday evening that the Department had received a call about the fire close to 3:30pm. On arrival, the Fire Department vehicles had a difficult time driving on the narrow street.

“When we arrived, firemen tried to find out if they had any persons in the home. We were told that a man and a child were in the home, but had managed to escape from the burning house,” Gibs said.

The Fire Department started to extinguish the fire and control the blaze. The fire hydrant was about 600 metres away from the house and fire trucks had to transport water back and forth from the closest hydrant, according to Gibs.

Firemen were hesitant, as the current was still on in the home, but GEBE employees came to the scene and took care of the current to allow the Fire Department to deal with the flames.

“We had the situation under control and managed to save the homes surrounding the wooden home. Ambulance officials arrived on the scene after and checked on the two persons who were in the home,” said Gibs.

Ministry of Public Housing, Spatial Planning, Environment and Infrastructure VROMI personnel arrived on the scene, declared what was left of the home a hazard zone and ordered the remainder of the house demolished.

Heavy smoke clouds were seen from a distance on Tuesday afternoon while the home was on fire.