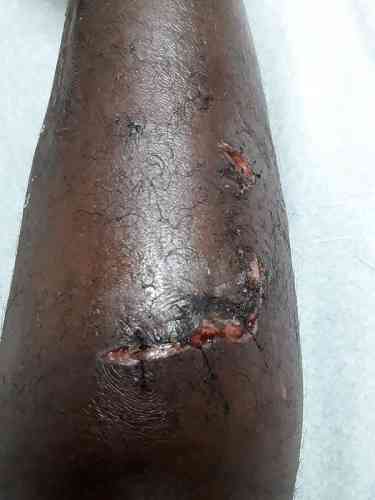 PHILIPSBURG–Gemini Contractors worker U.V.D., who was mauled by three pit bulls on his way to work in September, is upset that his employer has not paid him from the day he was incapacitated and went on sick leave and did not cooperate for him to get his medical insurance renewed to cover his medical expenses.

In an invited comment, Gemini Contractors official Rudy Nijbroek said the company was being audited by Social Health Insurances SZV at the time and had been unable to register, deregister or renew anyone at SZV at the time, a claim the insurance service provider has denied.

The worker told The Daily Herald he was attacked by three pit bulls in Middle Region just before 6:00am on September 7, when he was on his way to work at a project on Blueberry Hill. When the dogs pounced on him, he fell on the road and fought them off, but not before they bit him on his legs and fingers.

Bleeding and in pain, the man went to the Emergency Room at St. Maarten Medical Center (SMMC) where he received several stitches for the wounds on his body. His insurance had expired and he has an outstanding bill at SMMC for the services rendered.

He said he had been asked to go to his house doctor. However, he did not have any money at the time. According to the worker, his SZV medical insurance had expired on July 18, 2017, and he had visited SZV, where he received a form for his employer to fill in and sign, and he had to take it back to SZV for his insurance to be renewed. The man said he had taken the form to the company to fill it, but despite several follow-up enquiries the form was never returned.

The man said he had visited SZV again after he fell ill and was again given a form that his employer has to fill in for his insurance to be renewed. He was given an appointment date of September 26, to return to SZV with the form for his renewal. According to the worker, he again took the form to a company official and was told it would be passed on to the managing director and returned to him, but this was never done despite his requests for the form.

The man said Nijbroek had been at the office when he took the form in September and when the matter was brought to his attention by another staff member, Nijbroek had blurted out expletives and questioned what a dog bite had to do with him. When asked about this, Nijbroek denied making the statement and said he had advised the worker to file a police report about the dogs that had bitten him, as the owners should be held liable.

The worker said he eventually had gone to his house doctor and had to find US $30 to pay for each visit. He provided this newspaper with copies of his receipts for his doctor visits and medication purchased.

The worker is upset that his employers were not cooperating for him to get his insurance although premiums were being deducted from his salary.

Added to his dilemma is the allegation that his employers have only paid him up to the day before he was bitten by the pit bulls. He was not paid from the day he received the injuries and was on sick leave. His employment contract, which he provided to this newspaper, states if an employee is absent from work due to illness or an accident, the employee will be paid by the employer to the extent that is provided for by the applicable laws.

“The employer shall be reimbursed by the SZV provided the salary of the employee qualifies the employee for sickness and accident insurance coverage … ,” the contract reads.

Responding to the worker’s complaints, Nijbroek said he had advised the worker to file a police report, as he was bitten by the dogs on his way to work on a road close to his home and the owner of the dogs should be liable for his injuries. He said also that he had loaned the worker funds to renew his residence papers and has not been paid back.

“There is a whole history of this person. It is not completely true what he is saying,” Nijbroek said.

The worker said this is a complete fabrication, as the company does not assist any employee in this manner.

On the matter of SZV, Nijbroek said the company could not register, unregister or renew insurance of personnel because it was being audited by SZV since two months ago, despite Gemini Construction paying premiums for its workers. It is only last week that the company is able to do this.

When asked about the worker’s unpaid salary while on sick leave, Nijbroek said he would have to look into the matter because he does not know the exact dates. However, he said the company pays its SZV premiums. When a worker is on sick leave, certain procedures have to be followed, after which SZV usually reimburses employers a percentage of the salary that is to be paid to a worker who is out ill.

Nijbroek said the current situation was like “a circle,” referring to the complaint that the worker’s insurance could not be renewed, hence the worker would be unable to get the necessary documentation for the employer to be reimbursed.

In the meantime, the disgruntled worker, who works as an “on-call” helper, says he is feeling better and he will be showing up for work on Monday.

Contacted for comment, SZV said that while it is unable to disclose details of audits that it performs on individual employers, the allegations that employers cannot register or deregister workers during an audit is inaccurate.

“While an audit is taking place, there is no restriction on registering or deregistering employees. Also, card renewals can continue as regular. In our compliance campaign, we focus on the importance of registering and deregistering employees on time and to update the employee information in a timely and accurate manner to SZV,” SZV Customer Care and Communication Unit Manager Parveen Boertje said.

“In cases that SZV has additional questions based on the obtained documents, we will request additional information or elaboration from the employer.

“It is of the utmost importance that employees are aware of their responsibilities as well: ask for your pay slips, a copy of your labour agreement and always have a valid form of identification at hand.

“In case of non-compliance by the employer, an employee can visit the SZV office. In these cases, SZV will approach the employer and will go over the list of registered employees to see if all information is still up to date.”

She added that when employees have medical emergencies they can request the renewal of their insurance card with their supporting medical and employment documents.

“SZV needs to be able to establish that there is an employment relationship between employer and employee and that the employee is entitled to the medical insurance according to the Sickness Ordinance,” she said.

She urged the worker in question to take his employment documents to SZV so it can advise him better based on his specific situation.