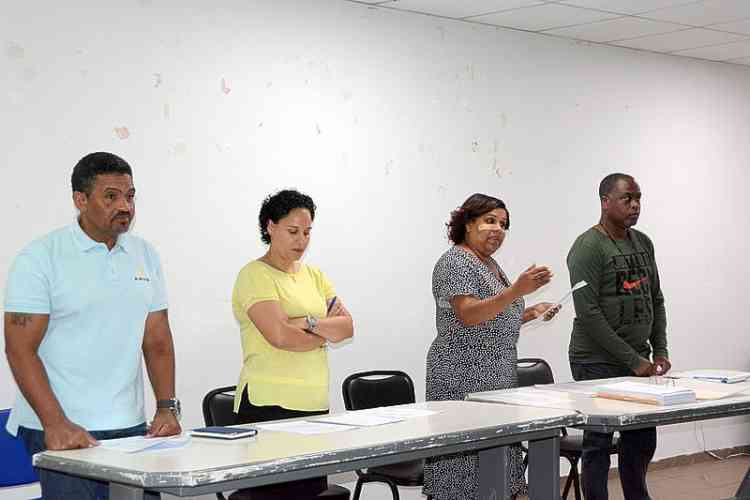 PHILIPSBURG–Government workers expressed concern on Thursday evening about certain aspects of the draft National Ordinance for the Revision of the Pension of Civil Servants and unanimously gave their unions a mandate to call a meeting with all Members of Parliament (MPs) to table their concerns to the legislators.

The intention is that after the concerns are conveyed to MPs, the legislators in turn will raise these issues during the continuation of the debate on the draft ordinance and make sure they are addressed.

The crowd of an estimated 70-80 persons also passed a motion to make it clear that they have not given up their rights to the cost of living adjustment (COLA) and demand that it be paid.

A passionate WITU President Claire Elshot wore a plaster across her face to send a strong message that “the budget cuts hurt” and that “COLA matters.”

Elshot told The Daily Herald after the meeting that based on the unanimous mandate given by the joint membership, the four unions will be sending out letters to all MPs today, Friday, inviting them to a joint meeting with the unions at the WICSU/PSU office on Walter Nisbeth Road (Pondfill) at 6:00pm Tuesday, April 2.

Elshot said the unions have an obligation to represent their members and if MPs fail to attend the meeting or address the concerns of workers on the floor of parliament, the unions will have to get together again and determine their next course of action.

High on the list of pension concerns for workers is losing their acquired rights under the proposed new system. Another important concern is the inflexibility of the proposed law.

Workers believe that when the pension age is increased from 62 to 65, they should not be penalised by receiving a lower pension if they decide to retire earlier than age 65. Built into the draft law is the possibility for workers to retire at the age of 62, if they want to, after the pension age moves to 65. However, if they do so, they will receive a “somewhat reduced” pension.

Elshot said also that government workers will not end up with more pension at the end of the month under the new proposed average pay system contained in the draft law. She said the draft would actually benefit government, as one of the proposed changes is a reduction in the percentage paid into the fund by government for civil servants from 25 to 18 per cent. The premiums being paid by civil servants will not be changed.

Currently employers contribute 19 per cent to the pension fund and employees contribute 6 per cent of their salary.

A concern regarding the proposed change from the end pay to the average pay system is the fact that many persons are stuck in step 20 of the salary scale and this would affect the pension they would eventually receive. Elshot said the importance of workers receiving their cost of living adjustment (COLA) is also important.

As it relates to the COLA motion passed, Elshot said workers wanted to send a clear message that they have not given up their rights to the COLA and they are demanding that this be paid.

Elshot explained that an advice had been sent to Minister with responsibility for personnel affairs Prime Minister Leona Romeo-Marlin from the Committee of Civil Servants Unions (CCSU), formerly known as the GOA, for a COLA of 11 per cent to be paid to workers. Elshot said a response had not been received from Romeo-Marlin.

When asked whether the payment was realistic, given the country’s financial situation, Elshot said that if the country can afford to purchase new cars and pay for consultants, as is contained in the draft 2019 budget, it can afford to pay the workers 11 per cent COLA.

“In the budget, we are not seeing anything in there for the workers or civil servants. … There is nothing in there to improve their living standards,” Elshot contended.

One of the main changes in the draft law is shifting of the payment system into the fund from an “end pay” system to that of an “average pay system.” Another major change is moving the pension age to 65 from the present age of 62. Also changed is the ending of widow’s pension for ex-spouses. The possibility has also been built in for future changes to be made to orphans’ and widows’ pensions as well as for the disability pension.

Also built into the draft is a recovery mechanism which will go into effect if the coverage ratio of the pension fund goes below 100 per cent. If this is to occur, the general pension fund administrator APS will be required to come up with mechanisms to restore the credit ratio within five years. If this plan fails, employers and employees will have to make contributions to the fund to restore it.

The draft also includes the possibility for civil servants to buy extra pension at their own expense.

All persons who roll over into the new system will receive 10 per cent of their already-accrued pension rights and will build up further pension according to the new rules.

The sizeable crowd of attendees at Thursday night’s meeting included government workers from police, teachers, firemen and ambulance personnel to persons who work in administration in the civil service, amongst others.