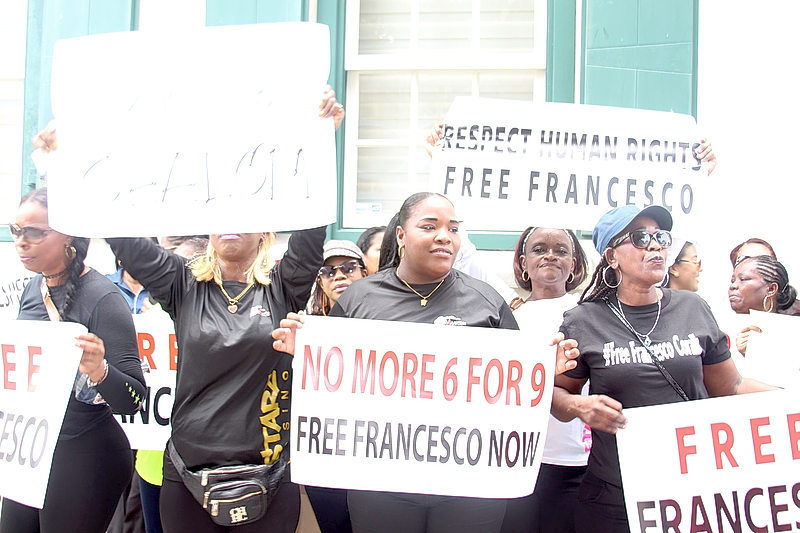 Some Starz Casino employees on Tuesday, holding up signs and calling for Francesco Corallo’s immediate release.

PHILIPSBURG–Workers of Atlantis Group of companies are still distraught about the six-month pre-trial detention of owner Francesco Corallo (56). Workers reached out to The Daily Herald on Thursday to express their disbelief that Corallo is being treated like a murder suspect. Francine Gonzales has been working with Corallo for 13 years and said the extradition process is taking forever and Corallo has to sit in a cell while Italy and St. Maarten try to get their “stuff” together. “From what I understand from lawyers, taxes that he owed were paid, yet they are rushing to get him to Italy. Something is strange about this case,” Gonzales said.

“Corallo has been an upstanding businessman for over 30 years and this looks more of a witch hunt than justice. He has contributed to the development of St. Maarten and has always been a good cooperate citizen. The only crime that Mr. Corallo is guilty of is being too nice,” said Frances Hernandez, who works in real estate with Corallo.

The workers also said Corallo is being painted as if he broke laws in St. Maarten. He was arrested in the early morning in December and put away in a cell.

One of the workers said a good example of injustice is that of the extradition request for former police officer Gregory Rogelio Koeiman, who was recently extradited to the United States (US) to face drug-related charges. The authorities in the US requested Koeiman’s arrest in September 2013. He was arrested in Curaçao one month later, after which the US requested his extradition. Four years and several court cases later, Koeiman was extradited to the US on February 15, 2017.

The Atlantis group workers believe the back-and-forth of court cases will continue, and Koeiman did not spend as much time as Corallo behind bars awaiting extradition.

“Mr. Corallo employs close to 400 workers. He can be allowed out of jail and give up his passport, identification, car, driver’s licence, whatever documents they want. He has made St. Maarten his home and he does have a Dutch passport. We need to protect our citizens from corruption from the outside world,” said Gonzales on Wednesday evening.

The general sentiment among all workers is to inform the population that Corallo should be treated as a human and not an animal that deserves to be locked up in a cage.

“After all, there has not yet been a trial in St. Maarten or in Italy. Let’s all remember that you are innocent until proven otherwise,” stated workers on Thursday.