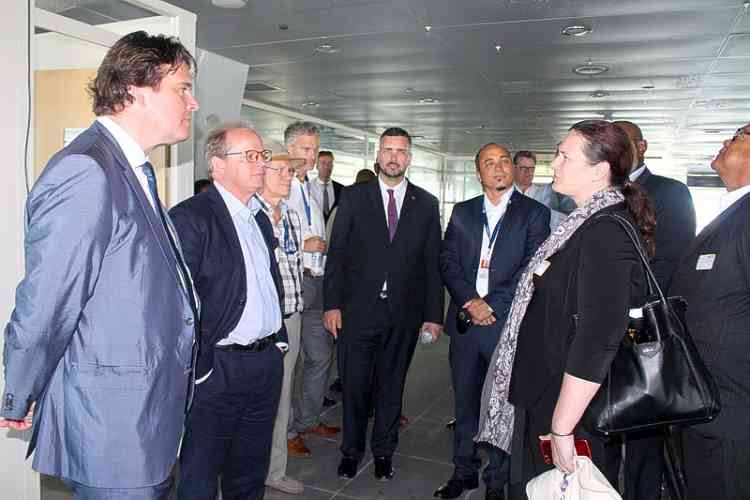 PHILIPSBURG–World Bank Vice-President (VP) for Latin America and the Caribbean Axel van Trotsenburg calls on all stakeholders involved in the restoration of Princess Juliana International Airport (PJIA) to step up the pace and have its terminal reconstruction work completed sooner rather than later, according to a statement issued by PJIA on Monday.

The visiting World Bank official recently advised PJIA management to work “triple shifts” if necessary to ensure work is being carried out around the clock and to ensure that personnel involved in that work are not being overworked.

The strong words of advice came on the opening day of a working visit to the airport last Thursday at the invitation of PJIA Chief Executive Officer (CEO) Brian Mingo. Also taking part in the airport visit were Minister of Tourism Stuart Johnson, the PJIA managing board, National Recovery Programme Bureau members, the St. Maarten representative on the Steering Committee of the World Bank Trust Fund, the St. Maarten Tourist Bureau director and members of the Kingdom Affairs BZK Ministry.

Mingo said Trotsenburg’s comments were heard loud and clear and fell perfectly in line with his own views and conviction and those of his managing board. He said he has been pressing himself since January this year for the next phase of the airport restoration programme to get underway once financing can be secured.

“We both recognise that the full return of PJIA is very important to the economy of the island, not only in terms of airlift, but also as an indicator to the many investors waiting in the wings that the island is fully recovered and fully operational once again,” said Mingo.

He recently stated that Dutch carrier KLM will be reinstating direct scheduled flights from Schiphol Airport to PJIA, adding further weight to Trotsenburg’s comments on the need to speed up the next phase of the restoration process, which is expected to begin in the third quarter of 2019.

“I am very happy to be hosting the visit of Trotsenburg and to get the opportunity to show him what we have done so far and how we intend to proceed in the coming weeks and months. I also recognise that he has not held back on his public comments about the need to step up the pace and get things moving,” said Mingo.

He is also encouraged that even before his arrival at PJIA, Trotsenburg had commented in the media about improvements in the restoration of the island generally since his last visit, providing encouragement that things are on the right track.

Mingo also added that the critical need to get the airport back up and running because of its role as the heartbeat of the economy is as clear as the need for the US $100 million loan being provided by the World Bank and the European Investment Bank (EIB) for the second phase, or Package 2, of the restoration programme.

He plans to continue to look for ways to speed up the process to ensure the newly reconstructed airport is unveiled in 2020, with the introduction of triple shifts if that is what it will take.

“Based only on the amazing work the management board has done immediately after Hurricane Irma and up to the present time, I am confident we will be able to deliver a fully-functional PJIA within the target date of 2020, especially with the support of top officials like Trotsenburg who remain in our corner and continue to provide the kind of encouragement that he gives,” concluded Mingo.