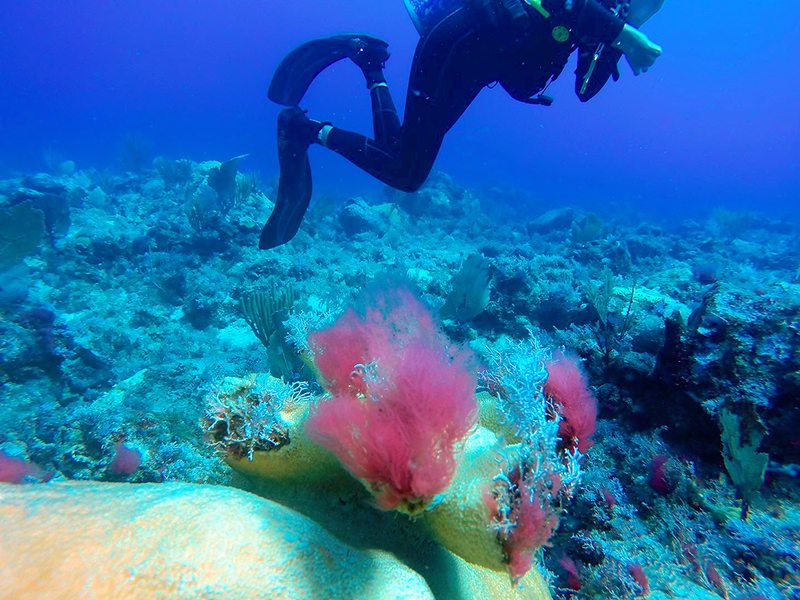 LITTLE BAY–Nature Foundation has recorded a “worrisome” amount of red algae species in several shallower dive sites. Large red algae blooms were recorded in the Marine Park and on other reefs around the country.

The Foundation is continuously monitoring the reefs’ health and assessing underwater damage caused by Hurricane Irma. The blooms were recorded during the November checks.

To curb the algae blooms, the Foundation warns residents, visitors and businesses to ensure no sewage flows into the ocean or lagoon to prevent further water deterioration.

Blooms of red algae can hamper the regrowth of several reef species that were damaged due to Irma’s swells. Red algae are strong competitors and their fast growth rate will leave no space for important reef builders such as corals and sponges to recover.

Algae blooms can be an indicator of water quality, showing a decrease in the water quality on St Maarten reefs and surroundings, said the Foundation. Certain red algae species can also be a health issue when very abundant and close to shore.

“The state of our reefs is, especially now, worrisome, as already 50 per cent of the reef has been damaged by Hurricane Irma,” said the Foundation.

An outbreak of red algae is probably due to increased nutrients feeding the algae and causing it to bloom. Increased nutrient input could be associated with hurricane passage or due to pollution such as sewage outflow.

High hurricane winds stir up the ocean water, bringing nutrients from the deep at a time when warm summer water is often nutrient-depleted. The nutrients spur algae to grow, creating large blooms of algae. However, the red algae outbreak also could be related to the recent pump-out of Great Salt Pond, causing polluted water with high nutrients to flow to the reefs, said the Foundation.