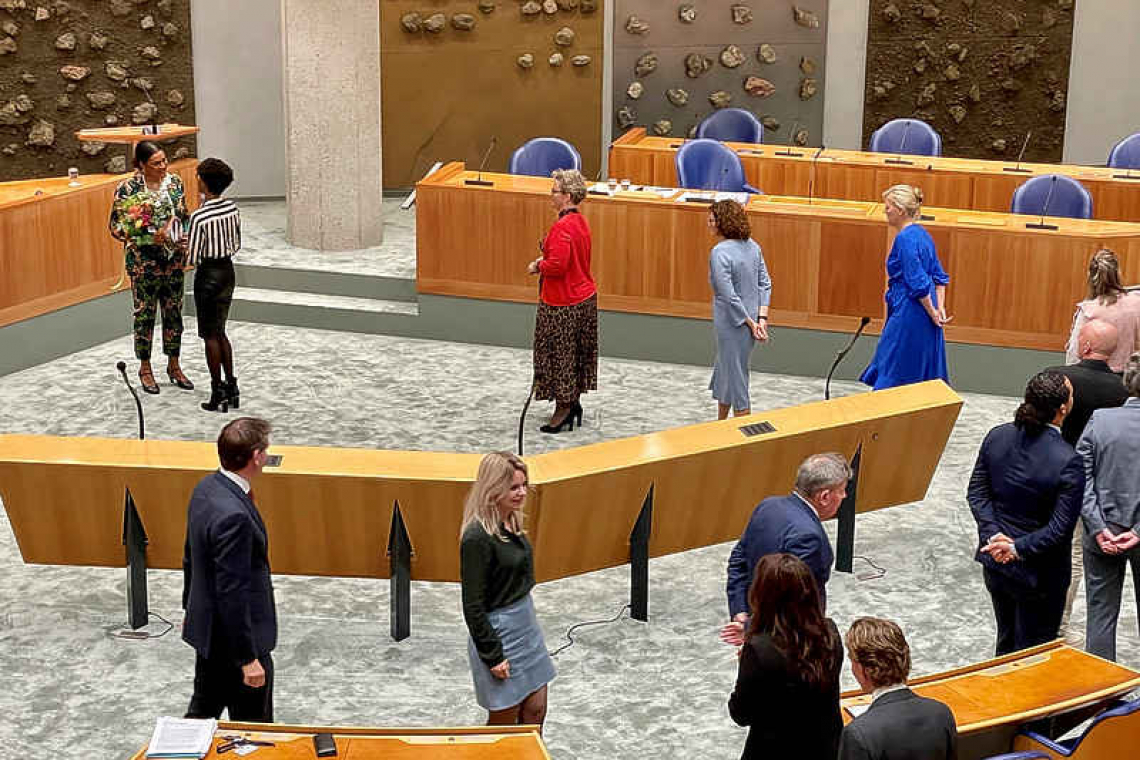 Jorien Wuite (far left) is congratulated by Member of the Second Chamber Sylvana Simons of the BIJ1 party on her maiden speech while other Members of Parliament await their turn. (Suzanne Koelega photo)

THE HAGUE–It was a very special moment for Jorien Wuite on Wednesday, when as a Member of the Second Chamber of the Dutch Parliament of the Democratic Party D66, she held her maiden speech during the handling of the draft 2022 Kingdom Relations budget.

“What an honour to be here, in the heart of our democracy,” she began in her maiden speech, which traditionally can be a bit longer than the regular contributions during plenary meetings and are also never interrupted by fellow Members of Parliament (MPs).

Wuite shared her personal experience of Hurricane Irma. “Four years ago, on September 6, 2017, I was in a small bathroom with my aunt Marge when the storm hit St. Maarten at a speed of more than 300 kilometres per hour. You will surely have seen the images of desperation and chaos. My best purchase to prepare for Irma was a chainsaw which I needed to cut through fallen trees to reach the road,” she said.

“‘We are a resilient country’ was the mantra of many in 2017, not knowing that the belief in a resilient community last year would be a central theme in all parts of the kingdom, also here in the Netherlands,” she said, referring to the coronavirus COVID-19 pandemic. “Crises of this magnitude have an enormous impact on your life, also mine. I will always carry that collective feeling of disaster and the resilience that succeeds this.”

Wuite said the history of the kingdom started long ago. “When I think of our history, I also think about the story of the Dutch Kingdom and its colonies. The relationship of the coloniser and the colonised lasted for more than 300 years. Through education and our honest dialogues here in the Second Chamber, we need to talk about our shared history, the Dutch role in the slave trade. We need to talk about the consequences, what it did with the relations, to the torn family ties and how to get rid of these deeply-rooted problems and inequality.”

According to Wuite, the Dutch Caribbean people are calling on the Netherlands to replace the images of failure and inability by things that are going well, “such as local entrepreneurship in Otrobanda, the steadfastness to improve agriculture – about talented professionals here and there, creative people who show so much talent and vibe that makes you feel alive; about Saba as the first place in the Netherlands with 100 per cent sustainable energy between 8:00am and 5:00pm.”

Wuite said she was also a representative for the Dutch Caribbean people of whom she was proud every day because they fought against misfortune. “They tell me that they do not feel included. They see little representation and that is why they often do not make use of their right to vote.”

Citing the importance of “we”, Wuite said that she would rather not speak about a European or a Caribbean part of the kingdom, or about four countries and three public entities, but about the hope and aspirations of one Kingdom of the Netherlands – a kingdom with a focus on joint values, honesty, justice and opportunities.

“That demands commitment and investment, not ambivalence, restraint or doubts, neither here nor on the Caribbean islands. D66 makes a plea for a new chapter in kingdom relations. Based on strength and the voices of many. I stand here for these aspirations. I feel that we can make this happen in this new Second Chamber, more diverse than ever. People expect us to heal, to connect. It is based on this personal story that I continue my input for this budget debate with themes like social justice, democratic values and climate.”

Upon completion of her maiden speech, Acting President of Parliament Martin Bosma congratulated Wuite, who received a bouquet of flowers. After that, MPs stood in line to personally congratulate her. Wuite, who is of St. Maarten and Dutch descent, was elected to Parliament in March this year.