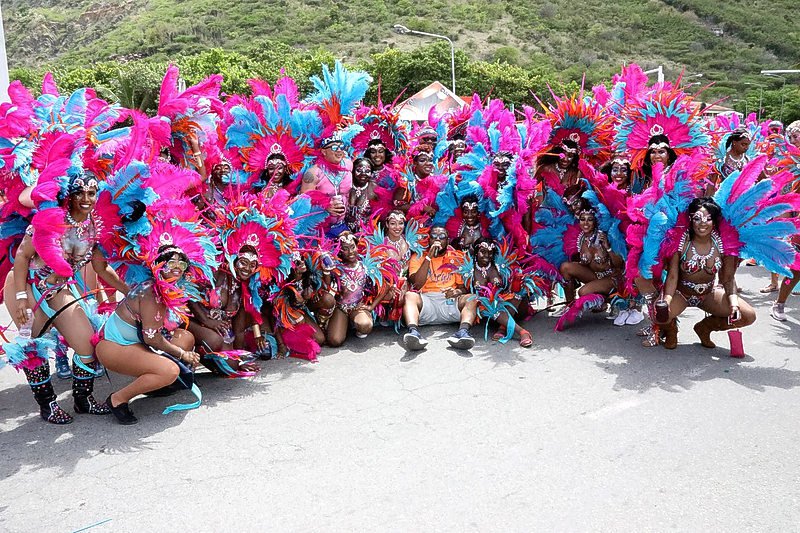 CARNIVAL VILLAGE–Eleven Carnival troupes brought their A-game for the 48th annual Grand Carnival Parade on Monday. Parade spectators could not complain about the parade, as it took nearly three hours for sections of the parade to pass key spots along the route.

E360 Productions’ troupe Xscape the Band came out on top as winner of the parade.

Results came in late this year due to discrepancies in the judges’ results after the parade. St. Maarten Carnival Development Foundation (SCDF) issued a statement on Tuesday saying the board had decided to render final judgement of the parade’s participants based on established criteria and after acknowledging some discrepancies with initial judging. SCDF did not provide further details about these discrepancies.

SCDF also acknowledged that it has to go back to the drawing board regarding parade criteria to ensure that selected judges are absolutely clear on what to judge. It also said it will address the structure of the parade, which is “sometimes a bit unbalanced.”

Yee’s orange and gold section was called “The Ponum Dance.” It has been said that Africans celebrated the abolition of slavery by dancing the ponum. The costumes were made from orange plumes, orange hackle, gold braids, assorted rhinestones and flowers. The skirts were cancan skirts. Latvian, Reggae, Calypso, Zouk and Absolute sections represented vibrant colours and unique styles of design.

Island Revellers followed with four sections that caught parade-watchers’ and judge’s eyes throughout the parade. Close to 200 parade jumpers took part in Island Revellers’ troupe, which is in its second year of existence.

Beverage company CC1 had its very own troupe this year called Blue Etoile. Sections of the troupe included red, green and blue.

The CC1 troupe was followed by a visiting troupe from Curaçao which was joined by St. Maarten’s very own Control band.

Love 4 Fun and Empire brought the fête with their vibrant sections. The first section comprised sunken treasures while the Jelly Fish and Seagulls completed both groups.

Road Warriors troupe showcased its costumes on the road and featured colourful pieces in its sections. The individual pieces were eye-catching and troupers were seen enjoying every step of the way.

Survivors troupe headed by long-time troupe leader Jasmine Philips was joined by Mixmaster Pauly’s music truck and No Limit Band. The theme for this year’s Survivors troupe was “butterflies,” the execution was done swiftly and dancers made sure to catch the attention of parade-watchers.

One of the competing floats for this year’s parade came from The Scientist, who made a float honouring One Tete Lokay running for freedom.

Xscape the Band could have been considered the largest and liveliest troupe on the streets on Monday. E360 Productions had five sections with 250 participants. The sections were Scarlet, depicting red birds; Pavo representing the peafowl; Panther, portraying big cats; Azteca, depicting the Aztecs; and Serpent, representing snakes.

Rio Productions followed with the Soggy Dollar music truck and a parade troupe from Guadeloupe rounded off the end of the Grand Carnival Parade.

The Chinese Foundation wanted to give back to the community this year and decided to participate in the parade by giving out juices and water throughout the parade route.

Coordinator Gina Illidge thanked all troupes for their participation in this year’s parade.