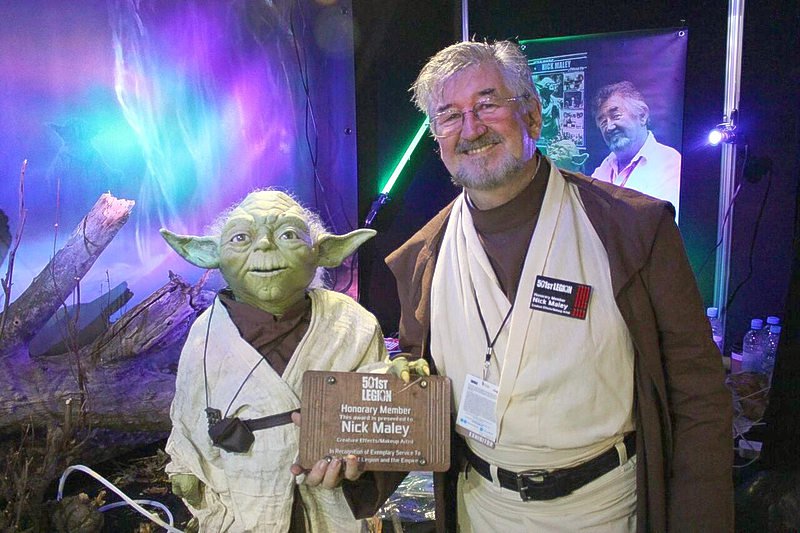 “Yoda was the world’s first animatronic super star,” Maley explains, “and the original fell apart 20 years ago. We recreated that puppet using the original technology and showed holograms, like the ones in our St. Maarten museum of Yoda puppeteers, movie producers and animatronic technicians telling how they experienced making history in 1978, when we created Yoda and other creatures for the Star Wars Trilogy.”

Some 25,000 Star Wars fans were in London to see the event and a have good time. The event was held at the Excel ‘London Exhibition Centre July 15-17.

When Maley’s birthday coincided with the last day of the convention, the event was made even more memorable by an unexpected and rousing rendition of “Happy Birthday” performed by three uniformed Stormtroopers.

Maley and Yoda returned home proudly clutching a commemorative plaque presented to the Yoda Guy to record his induction into the 501st (Storm Troopers’) Legion, which is the world’s largest Star Wars fan group.

The newly rebuilt animatronic Yoda, which was assembled in St. Maarten, is the only puppet worldwide that utilises the same principles as the original seen in The Empire Strikes Back. The puppet is now on permanent display at The Yoda Guy Movie Museum on Front Street 19A in Philipsburg.