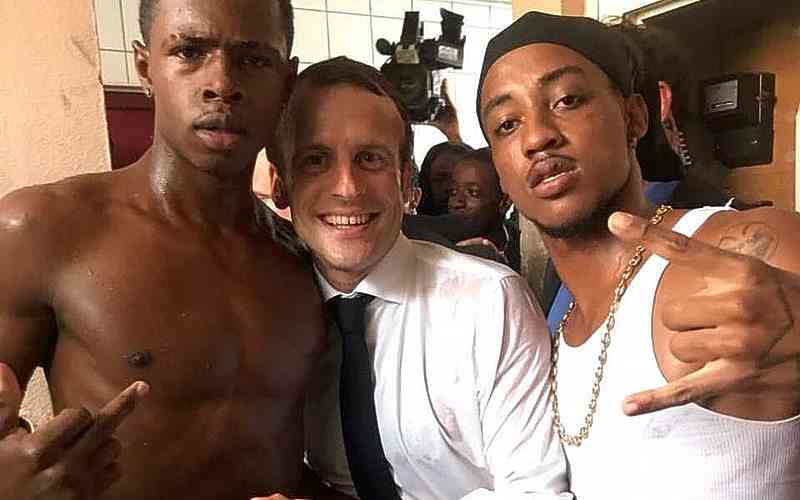 MARIGOT–The young man Reault Fleming from French Quarter who attained local celebrity status and attention in the national press after posing for a selfie with President of the French Republic Emmanuel Macron on September 29, 2018, during the latter’s official visit, appeared in court on Wednesday facing charges of drugs possession and violence against Gendarmes.

He was arrested in French Quarter on October 12 during a routine Gendarmerie anti-delinquency patrol. In May of this year he was released from prison for previous offences. Found in his possession were 25 sachets of cannabis (20.35 grams) and seven ecstacy pills. In addition, 36 euros and US $124 were found on his person. He attempted to escape with his bag of drugs and was pursued by three Gendarmes.

A physical altercation ensued with the Gendarmes as they attempted to retrieve the bag and hand cuff him. One Gendarme later filed a civil suit against Fleming for 800 euros for damages, after he had kicked them in the struggle. However, the three Gendarmes in court played down the extent of their injuries as not being particularly serious.

Fleming told the court he was not a drug trafficker and was actively looking for training programmes to reinsert himself into society. This was confirmed by a representative from Sem Ta Route, the insertion arm of SEMSAMAR, who told his lawyer that Fleming is “very motivated and deserved a second chance.”

It was also confirmed that Fleming had a place on a plumber training course starting in November. The court did not charge him for the violence. He was sentenced to eight months prison, with four suspended and 18 months of probation.