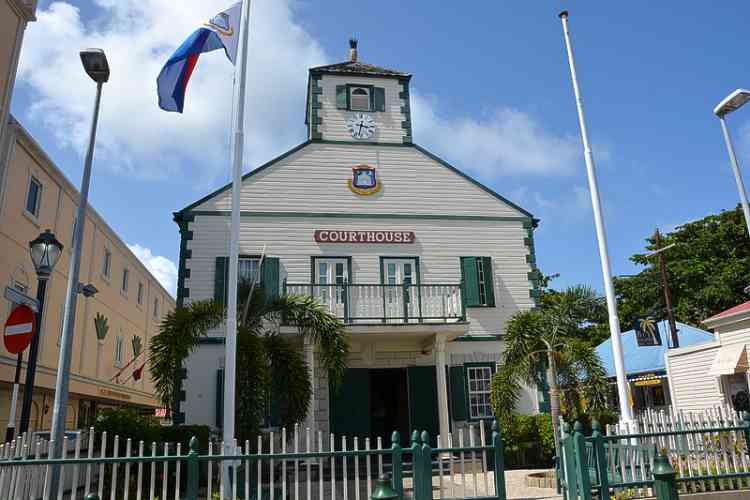 PHILIPSBURG–A 24-year-old man was sentenced to nine months, three of which were suspended as the Court of First Instance on Wednesday found him guilty of a wide variety of crimes.

Geoffrey Brooks pleaded guilty on most of the charges, among which was the attempted theft of cables belonging to telecommunication company TelEm between March 14 and April 6.

The unemployed defendant told the Court he had wanted to sell the cables in order to make a living. He was caught red-handed by residents who took his photo while he was climbing into a telephone pole. The attempted theft made residents lose their telephone and Internet connections.

The defendant confessed to having had 55 grams of marijuana and US $598 in his possession when he was arrested on April 23. The illicit drugs were packed in 31 small bags which he sold for money, the former hotel worker told the Court. He said he was laid off after Hurricane Irma damaged the hotel in September 2017.

He said he had “just” started to sell the marijuana for $5 per package. He cultivated the marijuana plants for his own personal use in Sucker Garden but declined to inform the police about his plantation’s exact location. He claimed he had earned the $598 by doing construction work.

He denied that the iPhone which was found in his possession was stolen. He said he had bought the device at Blue Point mega store for $100 four days before he was held but failed to provide a receipt.

Brooks was held at Walter A. Nisbeth Road while driving a white Toyota Corolla without number plates. The car was not insured, and he did not have a driver’s licence.

The defendant claimed he had purchased the car from the owner for $500 after Irma. However, the Vehicle Identification Number proved to be tampered with and two instead of one key were required to start the engine.

Brooks denied that a rifle with ammunition which were found in a bag in the back of the car were his. He had told the police the weapon had probably belonged to a “mechanic under the tree by the bridge,” who had fixed his car, but he had failed to provide detectives with the man’s name or telephone number.

Starting from 2011, the repeat offender has four crimes in his criminal record, which include theft with violence and mistreatment with a weapon.

The Prosecutor considered destruction of TelEm cables, possession of marijuana and the misappropriation of a stolen vehicle proven.

Despite the defendant’s “vague story” about the weapon’s origin, the Prosecutor called for an acquittal for the possession of an illegal firearm.

All in all, the Prosecutor demanded a prison sentence of nine months, three of which were to be suspended, on two years’ probation, with Parole Board supervision. He also called for two NAf. 75 fines for violations of the Traffic Ordinance.

Attorney-at-law Cor Merx stated that he largely agreed with the Prosecutor’s demand but pleaded for his client’s acquittal of misappropriation of a stolen vehicle.

He also claimed that Brooks should be acquitted of violations of the Traffic Ordinance as the Prosecutor had failed to mention in the indictment that Nisbeth Road is a public road.

Merx opposed a prison sentence. “He is a troublemaker with a drug problem, but my client is still young and deserves a chance in his life. He has spent time in pre-trial detention long enough and has learned his lesson. Is it not better to send him directly to [drug-rehabilitation centre – Ed.] Turning Point for supervision, on three years’ probation instead of two? I do not find this as a lawyer but as a father and grandfather,” Merx said in pleading with the Court to lift his client’s pre-trial detention and to return his vehicle.

The Judge followed the Prosecutor’s demand and also found the defendant guilty of traffic violations “as it is common knowledge in St. Maarten that Nisbeth Road is a public road,” he stated.

As Brooks was sentenced to nine months, three of which were suspended, with deduction of time already spent, he was released from detention yesterday.

The Judge ordered the confiscation of the money. The car will be impounded, and the firearm and ammunition will be destroyed on the Court’s orders.