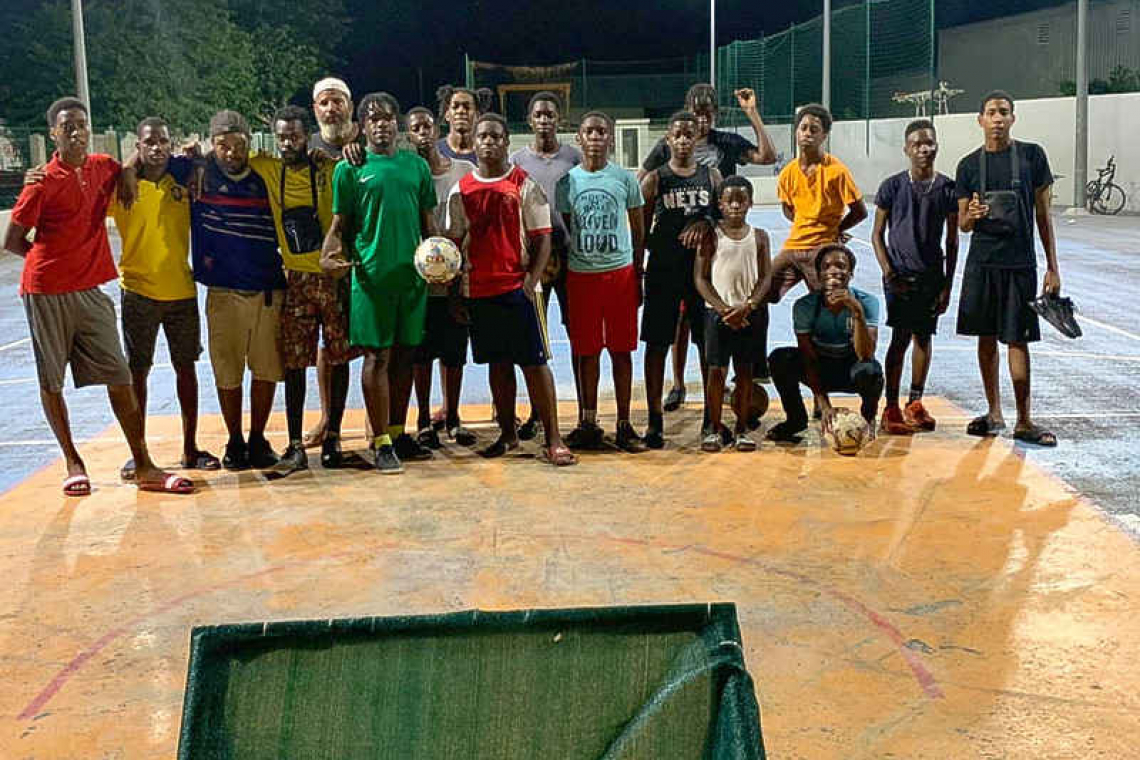 MARIGOT–Sandy Ground district representative Cédric André has once again drawn attention to the basketball court situation in Sandy Ground, where three months ago he appealed to the Collectivité for repairs to be done as quickly as possible. However, it appears nothing has been done since then.

If anything has been done, it is not noticeable. Instead, there is a deserted court in need of a paint job, no hoops, and a couple of small children riding around on bicycles. It is a far cry from the court’s inauguration after Hurricane Irma and the optimism surrounding the financial donation for Sandy Ground sports facilities made by Jonathan Bobbett in 2018.

“In Sandy Ground we have the biggest concentration of young people living here and some 700 children in the schools, and there is nothing for them here. It’s unacceptable,” said André. “They feel abandoned, deprived, and then you wonder why there are so many youngsters on the road riding scooters and behaving badly.

“Come on. … Nothing is being done for Sandy Ground. Look at the new courts in Grand Case. There’s no cultural centre here. No bathrooms for the courts. Nothing is being done socially, culturally and sports-wise. It’s always Sandy Ground that gets left behind. So, how do you expect children to turn out to be good citizens? The moment is going to come when we stop talking and take action,” he warned.

André reminded that the original materials and infrastructure were not strong enough for the players, and perimeter fencing needs to be repaired to prevent bicycles, scooters and even cars from coming onto the courts.

Responding, the Collectivité said renovation of the court had started in March following the collapse of the hoops and backboards. These were removed and a company was selected through a competitive bidding process. New equipment was purchased and stored at the Collectivité.

The company in charge of the rehabilitation intervened last week to dig the holes to install the new basketball hoops, rims and backboards. Plywood covers have been installed to protect the holes to prevent accidents. The new liners will be delivered on Tuesday and installed at the same time. The refurbishment work is due to be completed during June.

October 15, 2021
0
Louis-Constant Fleming HospitalMARIGOT—Préfet Serge Gouteyron said Thursday he has no authority to override decisions made by regional health authority ARS after saying on Wednesday...

October 15, 2021
0
MARIGOT—The body of a man was found in the waters of Marina Port La Royale on Thursday afternoon.  It was retrieved by police officers...
Local News

October 15, 2021
0
MARIGOT—The body of a man was found in the waters of Marina Port La Royale on Thursday afternoon.  It was retrieved by police officers...