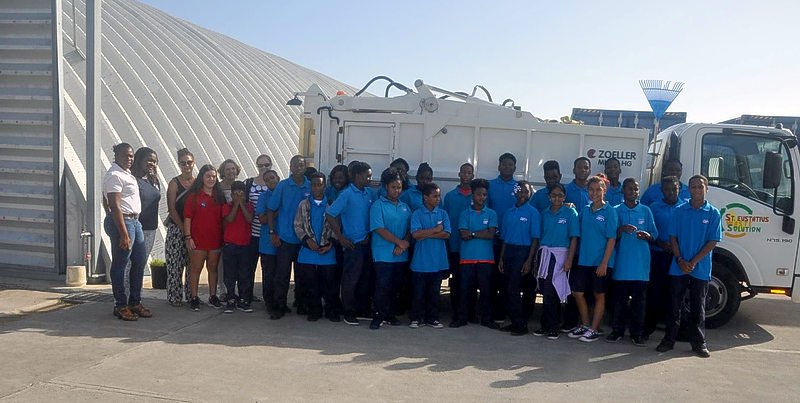 Active member of the Caribbean Youth Environment Network Sade Deane was selected to visit St. Eustatius for one week to engage as many pupils and students as possible and enthuse them about environmental matters.

Deane visited all but one of the elementary schools and after-school programmes where she introduced students to “Finn the Fish,” who had travelled from Barbados to Statia and stopped off at various islands along the way.

Finn encountered marine debris on his travels, ranging from plastic straws to cups, foam containers, plastic utensils and micro-plastics, the latter often being mistaken for food and ingested by marine creatures.

Deane’s key message was to highlight the dangers of marine debris for marine life as well as humans, who rely on fish and other creatures to supplement their diet.

Micro-plastics are pieces of plastic that have been broken down in the marine environment and become tiny fragments that often resemble food, such as fish eggs or plankton. The pupils as well as the teachers thoroughly enjoyed the activity.

The activities included a short presentation about marine debris, a fun game of charades where teams had to act out and guess the type of debris found on beaches and in the sea, and a creative activity to design a bookmark with a message about keeping coastal areas clean.

Among the most inspiring messages included slogans such as: “Micro-plastics look like sand,” “Don’t abuse because we can re-use,” “Sea turtles don’t want to nest in plastic,” and “Don’t be mean, keep the place clean.”

In addition to in- and after-school lessons, a special field trip was organized for students to receive a tour of the recycling facility, facilitated by Jeffrey Lewis of St. Eustatius Waste Solutions and his staff.

The tour included a demonstration of all the equipment within the facility, such as the glass crusher, sorting belt, cardboard and tire compactor, wood chipper, and the incinerator. Several students were given the opportunity to sort different coloured bottles into their appropriate containers, which were then sent to the glass crusher.

The field trip was considered an excellent opportunity for students to understand the importance of recycling, thus reducing the amount of waste that enters the (marine) environment.

CNSI said it was grateful to all persons who assisted with and facilitated the youth ambassador’s visit including Lyshandra Schmidt, Stephanie van der Heiden, Jeffrey Lewis, Froukje Spoelma and Olivia Vlijtig, as well as the elementary school teachers, Dion Humphreys of Mega D Youth foundation, and Elaine Cuvalay of Daughters of the King foundation.