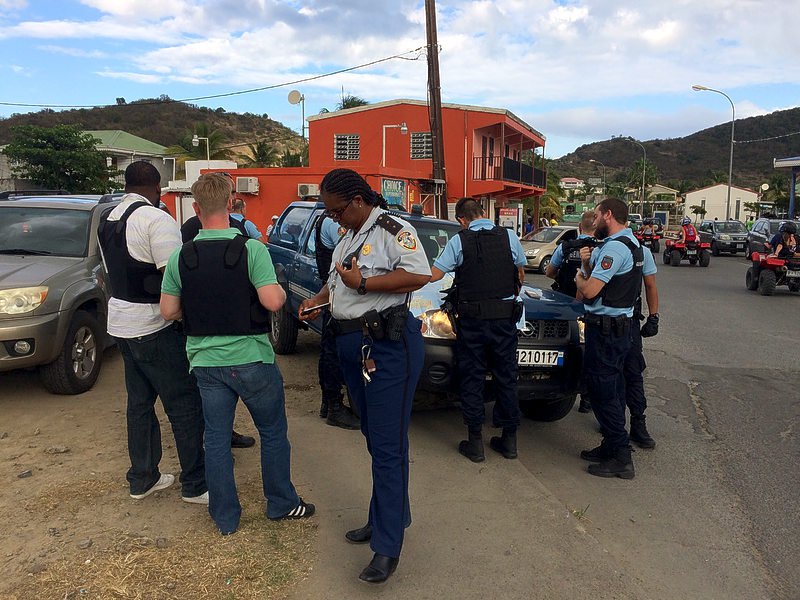 MARIGOT—Gendarmes, police from KPSM as well as plain-clothed police are currently searching French Quarter and Dutch Quarter for two suspects on a scooter who evaded a control in Sucker Garden around 3:00pm and fired shots at the police patrol.

According to preliminary information from Inspector Ricardo Henson police attempted to stop the scooter for having parts missing on it. The youths on the scooter disobeyed the order to stop and fled in the direction of Oyster Pond, the pillion passenger firing shots at the chasing police vehicle. No police officers were hit by bullets fortunately.

On Rue de Coralita in French Quarter Commandant Sebastien Manzoni dispatched several Gendarme patrols to assist the KPSM, and plain clothed officers in the search for the suspects. Dutch side police were also seen guarding the Belle Plaine border.

“Thanks to the police cooperation treaty, the KPSM were allowed to cross the border at Oyster Pond but they were not able to stop the suspects at that point,” said Manzoni. “So we were immediately informed and now we are doing our best to help our colleagues. Some KPSM units are allowed to patrol on the French side and vice versa for us on the Dutch side. We have a command center where we communicate by radio and coordinate these actions together.”