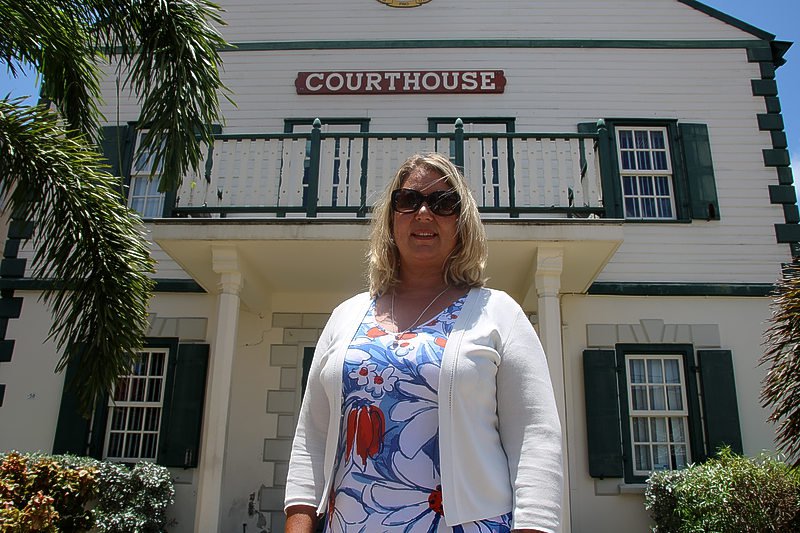 ~ Carrying a gun will not make this society a safer place ~

PHILIPSBURG–Prosecutor Karola van Nie has been working in St. Maarten since 2013 and will be moving on with her career in the Netherlands. Besides being the Youth Prosecutor, Van Nie also held the position of Prosecutor’s Office spokesperson.

The Daily Herald sat down with the prosecutor and asked several questions regarding her function while working on the island.

What was your first impression when you arrived on the island?

“I arrived with my family at the end of December 2012. I remember being impressed by the beauty of the green lush mountains and the colours of the sky, the sea and the flamboyant tree. But I remember also that it was crowded and the traffic seemed chaotic.

“It wasn’t love at first sight, but during time St. Maarten grew on me and is now here to stay in my heart. I came during high season but, despite the heat and the hurricane threat, low season has become my favourite time of the year, when it’s quieter.”

What were some of the challenges you faced while on-island prosecuting (youth) crimes?

“The challenge is that our position as Prosecutor’s Office here in St. Maarten is a difficult one and that I can feel we often lack support from society. If we want to be more effective in combating crime our organisation needs to get more embedded. Only then there will be enough trust to share information with each other to set common goals and priorities.

“Prosecuting is much more than only leading the criminal investigation and taking a case successfully to court. We are always looking at the bigger picture, because our goal is to make society a safer place. That goal can never be reached by just prosecuting. We would like to see much more cooperation with local organisations and Governmental institutions, because we could use their expertise, knowledge and authority.

“Guus Schram, our Attorney General, said in the vision document on the fight against crime that the Prosecutor’s Office needs to reinvent itself. We need to be more open in our communication towards society and victims, we need to be more transparent, we need to constantly make sure that the level of our expertise is high.

“When it comes to dealing with youth crime I always tried to seek the cooperation with local partners, but I only succeeded partially. Yes, we have a Judicial Youth Committee to advise the Minister of Justice and there is good cooperation with Youth Affairs when it comes to setting a national protocol on child abuse, but the common approach towards prevention of youth crime needs to be much broader and stronger. A chain is only as strong as its weakest link.”

What pattern, if any, have you noticed where youth-related crimes are concerned?

“I had a survey done about Youth Crime in St. Maarten (it was published on

sintmaartengov.org) and this survey showed my view on youth crime.

“Almost half of the crimes that are being committed at schools (mostly abuse, threat, theft and drugs) don’t reach the police. Schools deal with those crimes themselves, most often by suspending the child. In some of those cases it will, however, lead to expulsion and the risk of then ‘losing’ the child to crime is high.

“If you want to be serious about fighting youth crime, you need to keep every child as long as possible within the school system, preferably in schools which also offer a great range of afterschool activities.

“Not every child can be helped by structure, though. Sometimes it needs a good psychological diagnosis or knowledge of the family situation to understand why a child is showing behavioural problems. But investing in a strong educational system where there is a place for every child is the key when it comes to building a strong and safe society.”

You prosecuted the Officer Benjamin murder case. Was it difficult for you to prosecute those persons responsible?

“At least by being one of the prosecutors leading the investigation and ultimately bringing the case to court, I could do something. I am very impressed with how the Special Robbery Unit of KPSM [the Police Force – Ed.] handled the investigation; they showed professionalism and determination to not leave a stone unturned.

“What was hard for me was the outcome of the case and the low prison sentences the two main suspects got. This was a disappointment for us. I appealed the verdicts and I hope the Court of Appeal will assess the case differently.”

Best memories while working on the island?

“I have very dear memories when I think of the working relation with so many professionals here on the island and especially some police officers and the cases we have solved.

“I can’t really explain what it’s like to get a phone call in the middle of the night, get in your car not knowing what to expect and arrive at a crime scene. While people are in shock a prosecutor has to make a quick assessment of the situation, for which we are highly dependent on the police team working on the case.

“A highlight is, of course, the opening of the Miss Lalie Centre (MLC) in December 2014. I was very fortunate that I could be a member of the project team working together with some very skilled people and getting the full support of the former Minister of Justice in developing this much-needed youth rehabilitation centre. I sincerely hope that the importance of the MLC will remain acknowledged and that the necessary funds will always be made available.

“It must not be forgotten that the MLC is a young and new institution for St. Maarten, facing many challenges, and that we need all the help we can get; for example, by the close cooperation with Stichting Horizon in the Netherlands. The wheel has not to be invented again, it just has to be adjusted to the St. Maarten situation.”

Since the change of the penal code, has it been more effective?

“The new penal code, among other things, meant a complete modernisation of the juvenile criminal law, which was very much needed. But if you talk about effectiveness, then this does not come from a new penal code alone. For example, abuse is punishable by law, which means I could prosecute every slap in the face if there is enough evidence. But it is not as simple as that.

“First of all, we would never have the capacity to deal with all of those cases, but much more interesting is what the society as a whole would think of that. I sometimes miss the discussion in politics about what the common norms and values are in this young country; for example, regarding child abuse, sexual abuse, prostitution or the possession of guns.

“When we had the ‘Stop, drop and Go campaign’ I was eagerly waiting for a discussion in Parliament about the liberal gun policy proposed earlier, but nothing happened. I considered that as a missed opportunity, because it could have set a great example and sent out a strong message that St. Maarten does not want to be a country in which people think they have the right to carry a gun for their protection.

“I strongly believe that carrying a gun for protection will not make this society a safer place. And don’t forget, every illegal gun has found its way to come to St. Maarten somehow. Besides having the police get the guns one by one off the streets, we should team up to see what can be done in order to stop the guns being shipped into St. Maarten.”

What would you miss the most about working on St. Maarten?

“I will miss the great working relations, the small scale of the island in every sense and the last-minute planning. I knew when I came that I would not be able to finish everything I want to do here, but I didn’t know it would be so hard to let go.”

What is next for Prosecutor van Nie?

“On August 16 I will start working in Utrecht as a prosecutor specialising in how to best deal with all the information/intelligence that there is about criminal and undermining activities. The challenge is how we can best use that information, because starting a criminal investigation is not always the most effective way. Sometimes it’s better to share the information – for example, with the administration – and get a licence revoked. I am looking forward to get to know this new way of dealing with undermining crime.

“For those times I will miss St. Maarten, I will at least have Hans Mos, our former chief prosecutor, as my direct colleague and I’m looking forward to working with him again.”