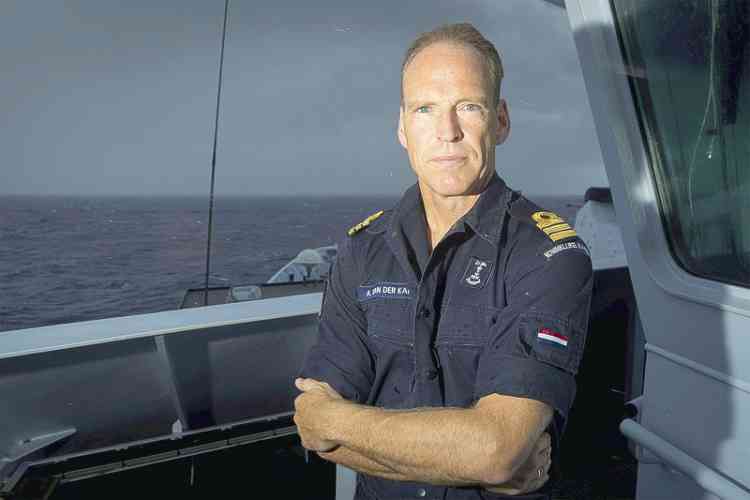 DEN HELDER–For Commander André van der Kamp and his men and women on the ocean-going patrol vessel HNLMS Zeeland of the Royal Netherlands Navy, the 36-day operation providing emergency assistance in the three Windward Islands and Dominica after Hurricanes Irma and Maria was both a unique and impressive experience.

Van der Kamp recounted the events of September and October last year during a lecture that he gave at the Navy Museum in Den Helder on Wednesday. Using slides, photos and film fragments, he presented an overview of the extensive emergency assistance Dutch Defence Forces – the Navy, Army, Air Force and Military Police – had provided. Operational details were provided, but Van der Kamp did not forget the human aspect and the emotional involvement of the mission.
“I have been working in the Navy for 32 years, but this was a truly unique event. No member of my crew had ever experienced a hurricane mission of this size before. It was unique on all fronts: the havoc caused by the force of nature and the resilience shown by the people,” Van der Kamp told The Daily Herald in an interview after the lecture.
Van der Kamp and the 90-member team of HNLMS Zeeland were very impressed by the positive attitude of the people they encountered, not only the persons to whom they provided assistance, but also the local authorities. “People said ‘We survived Hurricane Luis 22 years ago. We rebuilt our island then, and we will do so again this time.’ That attitude is very impressive.”
The stories of the people were moving and made a lasting impression. “People feared for their lives during that hurricane. People told us what they did to survive the storm, how they hid in closets, in bathtubs, under a mattress. Those stories made a deep impression on us. You can only have much respect when you hear people say that they are determined to continue their lives and to rebuild their island,” said the Commander.
The mission meant providing direct assistance to the people of St. Maarten, St. Eustatius, Saba and Dominica. “The general task of Defence is to assist, to help secure peace and safety in the world. But this time it involved a direct assistance of the people. It made us feel thankful and humble,” said Van der Kamp.
The bad situation the crews of HNLMS Zeeland and of the support ship HNLMS Pelikaan encountered in Dominica in the days after Hurricane Maria also made a lasting impression. More destruction, more deaths and a people in dire need of help. “In some remote areas we were the first aid workers that people saw after the hurricane. They were so happy to see us. That does something to you.”
During the 36-day mission, HNLMS Zeeland assisted four islands coping with the effects of three major hurricanes. Zeeland, which had been serving as the permanent patrol ship in the Caribbean since July 2017, and HNLMS Pelikaan, which is permanently stationed in the Dutch Caribbean, left for the Windward Islands just before Hurricane Irma, loaded with relief goods and additional personnel.

Damage assessment
Zeeland arrived in the Windward Islands shortly after Hurricane Irma on September 6. A reconnaissance flight was carried out with the ship’s NH-90 maritime helicopter for a first damage assessment. The first images of the destruction in St. Maarten were viewed around the world.
The Zeeland moored at the Great Bay harbour on September 7 despite the heavy swells and the absence of harbour facilities. Prior to that, crew members already had been dispatched to the heavily damaged Princess Juliana International Airport SXM to help clear the runway and prepare for the first emergency relief and evacuation flights.
The helicopter was of crucial importance in the first days, not only to provide transports in St. Maarten and to Saba and St. Eustatius, but to also allow the first Dash-8 aircraft of the Dutch Caribbean Coast Guard to land safely in St. Maarten with personnel and supplies by acting as air traffic control, as the Airport’s own air traffic control tower was not operational, explained Van der Kamp.
The Zeeland and her crew were able to provide assistance for a full day on September 8, but then came Hurricane José and the ship had to leave, but not before using all means to warn people about the pending new storm and handing out as much water and food as possible. On returning following Hurricane José, the Zeeland resumed her tasks for a full week until Hurricane Maria.
Priorities of the Zeeland’s mission were three-fold: supporting security tasks at vital facilities and transport tasks, including medical evacuations; building a damage assessment; and making the infrastructure ready for use, especially the harbour. The ship’s guard team was deployed to help secure the damaged Pointe Blanche prison.

Harbour inspection
A thorough inspection of the harbour above- and underwater made it possible for civilian ships to come into the harbour. One of these ships was Royal Caribbean Cruise Lines’ Adventure of the Seas, which evacuated some 300 tourists on September 9.
In the meantime, images started circling of looting, which caused a great deal of commotion among residents, politicians, and the media. Military personnel and local law enforcement officers responded immediately to restore order and safety. More military personnel from the Dutch Defence Force were flown in to a maximum number of 700. Several thousand people were evacuated within days.
In the meantime, the Zeeland’s crew continued providing emergency assistance to the people, working with non-profit organisations and helping out with technical advice and repairs. The Zeeland and Pelikaan used their internal systems to produce drinking water which was pumped into trucks and distributed in the districts.
Some facts and figures of the Zeeland’s deployment: water (bulk) 154,300 litres, water (bottles) 77,000 litres, high energy biscuits 24,000 kilogrammes, other food 19,500 kilogrammes and 48 medical evacuations.
The Zeeland’s helicopter and the two interceptor boats proved highly valuable during the hurricane relief mission. With the assistance of the Coast Guard personnel, patrols were carried out on the water. This helped to increase the sense of safety among the population. The air patrols during the evening and night hours served to increase the sense of safety as well.
The Pelikaan, which sailed 15 times between Curaçao, St. Maarten, Dominica, Antigua and Martinique, also had impressive input. The vessel produced 195,000 litres of water in bulk, transported 95 pallets of drinking water, 225 pallets of food, 575 pallets of relief supplies, 62 vehicles and 29,000 litres of diesel fuel. Personnel of the Pelikaan also helped with repairs and cleaning around the island.
The joint support ship HNLMS Karel Doorman, the largest vessel of the Dutch Navy, arrived in St. Maarten on October 1 loaded with 1,049 tonnes of relief supplies from the Netherlands and more than 250 tonnes of supplies from Curaçao and Aruba. The Karel Doorman returned to St. Maarten late October with more supplies.
After a 12-day hurricane relief mission to Dominica together with the Pelikaan, the Zeeland returned to St. Maarten on October 4, where in the meantime the Karel Doorman was moored. Two days later, the Zeeland left the island, having operated 36 days non-stop in aid of the Windward Islands and Dominica.
A proud Van der Kamp said: “The ship’s crew, the helicopter and interceptors, have greatly contributed to the total deployment by Defence. Without diminishing the role of the other military forces, I can say that the Dutch Navy ships were able to make a difference.”
The military operation ceased at the end of October 2017. A group of Dutch police officers remained on the island. Asked why Dutch Defence had not stayed in St. Maarten for a longer period, Van der Kamp explained that the initial deployment was to provide military emergency assistance.
“It was not a rebuild mission. At a certain moment, the emergency assistance period comes to an end and Defence has to move on to execute its other tasks. Recovery is an entirely different phase. This part is carried out by the country itself,” said Van der Kamp, who looked back at the mission which he called a “very special and unique experience.” This was also because it involved a close relation with the community of St. Maarten. “This story will stay with the crew and me for life,” he said.