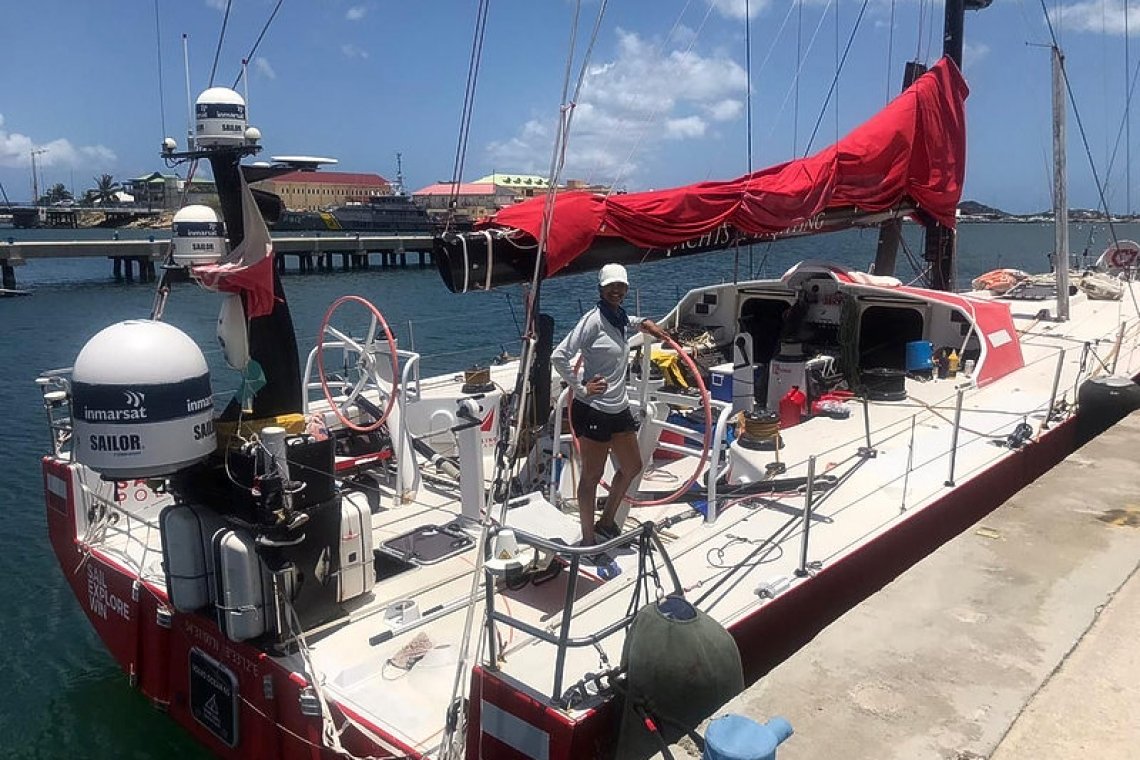 Shaëeza poses on the deck of the Volvo 65 “Mapfre” before departure.

Shaëeza (right) with another course student Randy on the former Whitbread yacht “Maiden”.

SIMPSON BAY–Somewhere in the mid-Atlantic, the Volvo 65 ocean racer Mapfre (Sailing Poland) is one week into a 4,500 mile transatlantic crossing returning to Poland via the Azores and the United Kingdom, having skirted around the remnants of Tropical Storm Arthur.

Not that there is anything remarkable about returning home for professional crews on high-tech ocean thoroughbreds built for around-the-world racing. What is remarkable is that on board is a graduate of Kidz at Sea Foundation’s Zero to Hero programme, recently qualified Captain Shaëeza Scheherazade.

The 28-year-old Dutch national’s meteoric rise in just a few months from zero to hero graduate – as the name of the course implies, students start with zero or very little knowledge – to what looks certain to turn into an international sailing career speaks volumes about hard work, passion, commitment, and chasing your dreams.

One can only imagine the adrenaline rush she must be experiencing on what will be her longest sustained period of sailing, day and night, handling a variety of crew functions, braving a mixed scenario of weather, and toughing out the absence of comforts below deck. Her previous longest distance stint was sailing around the island.

She is not the only female crew member on board. Two other women are part of the crew of six, plus the skipper. Given Shaëeza’s already proven capabilities, this voyage will enable her to learn more about navigation, radar and the instrumentation common to these yachts.

Like other yachts that participated in the Heineken Regatta, Mapfre’s departure was delayed due to the COVID-19 pandemic. Yachts found they were separated from their crews who had left the island temporarily only to find they could not return to join their boats due to the closure of the airport. The Volvo 70 I Love Poland is still here at Isle de Sol.

Mapfre left St. Maarten on Wednesday, May 13, with just three crew: skipper, a mate and Shaëeza. They stopped off in St. Barths and Guadeloupe to pick up more crew, before launching into the Atlantic crossing on May 16.

The Zero to Hero programme implemented after Hurricane Irma and run by Kidz at Sea Foundation is a 12-week course teaching everything about sailing, coastal navigation, maintenance, leading to students obtaining sailboat and powerboat licences, and international radio telephone operators’ licences.

Typically, 12 students are taken on at a time, with the course mixing theory and practical instruction with a lot of sailing, between 35 to 40 days on the water. The school has a Catalina 36 Moondance as its principle training yacht, Sunfast 20s formerly from Lagoon Sailboat Rentals used for fun and competition, and a 28-foot powerboat Seaglass.

Most of the students are local youngsters from the island. To qualify for the course, one needs to be at least 18 years of age and unemployed. The organisation Nationaal Rampenfonds in the Netherlands funded Shëeza’s course while Nationaal Rampenfonds, Samenwerkendefondsen, and currently Dutch Red Cross Lively Programme fund the Kidz at Sea programmes.

The syllabus is based on three instruction books: Basic Cruising, Bareboat Cruising and Bareboat Chartering. Students are evaluated and tested as the course goes on. They also have to pass the worldwide-recognised Standards of Training, Certification and Watchkeeping (STCW 2010).

Shaëeza, one of the top students, according to the instructors, was a hard worker from the get-go, missing only three days in 3½ months. She went to Milton Peters College before studying archaeology at Leiden University. Now, thanks to the Zero to Hero course, she has her power and sail endorsement under the Small Commercial Vessel (SCV) code.

She trained on the Sunfast 20 boats, Moondance, crewed on Ian Martin’s Spellbound during the second Caribbean Multihull Regatta, and assisted the all-girl crew on the legendary 58-foot former Whitbread yacht Maiden when they were here.

After a spell of working at Isle de Sol Marina and networking in the marine community she bumped into the crew of Mapfre which led to the offer of joining their boat. Clearly the Polish outfit was impressed by her drive and ambition.

“Shaëeza was an exceptional student and we are all very proud of her achievements,” said Jon Westmoreland, one of three instructors along with Garth Steyn and Tony Burn. “It was an awesome offer by Mapfre for Shaëeza and she just went for it. She’s a great, no-nonsense person.”

Who knows where her future will take her now? Once in Poland she will see what options are open to her. The summer regatta racing season in Europe will be starting and with it opportunities to race on different boats, COVID-19 notwithstanding.

With a 4,500 mile crossing racked up, she could now embark on Royal Yachting Association (RYA) certification if she so desires, which would add another arrow to her quiver.

Said Kidz at Sea founder Garth Steyn: “It’s exciting to see Shaëeza, who started with limited experience, do so well in the Zero to Hero programme. Having the opportunity to do her first Atlantic crossing on a Volvo Ocean racing class boat is a very challenging experience. It will challenge and change her in ways she is least expecting.”

Added Kidz at Sea Foundation President Lorraine Talmi: “We are so proud of how the Kidz at Sea programme is working and that young people can find something that drives them and to take advantage of the networking opportunities St. Maarten’s Marine Industry has available, not just locally but internationally. We look forward to finding out where this path Shaëeza has embarked on will take her.”

Kidz at Sea Foundation is looking forward to continuing with a fifth group of students once the COVID-19 crisis is over, and more groups of classes.