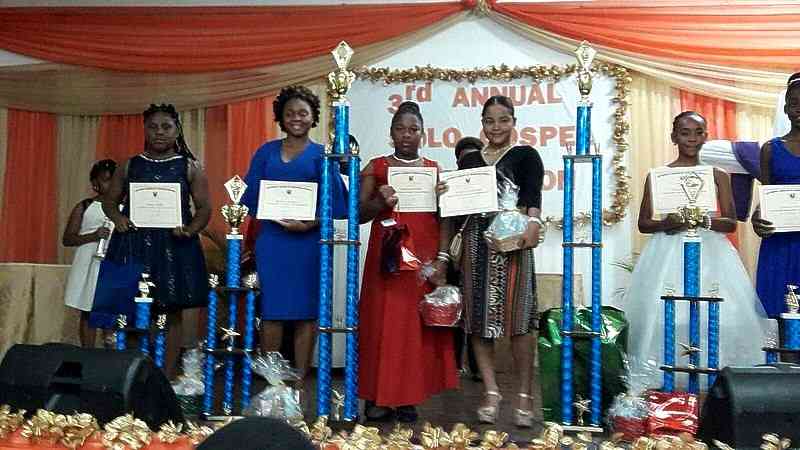 Participants in the third Annual Solo Gospel Competition with their prizes and certificates.

ST. EUSTATIUS–Zuw-Jeana Suares and Elizabeth Courtar were the winners of the third Annual Solo Gospel Competition hosted by the Children Commission of the Methodist Church at Christine and William Flanders Community Centre.

There were two categories of contestants in the Competition: children ages 7 to 12 years old and for the 13 to 18 age group.

The theme of this year’s Competition was: “The First one was Great, the Second One was Greater and the Third one will be Greater Yet.”

The winner from the age’s 7 to 12 category was Zuw-Jeana Suares. Her song “You Still Love Me” gathered 783 points. First runner-up Jahzara Daniel’s “Come Just As You Are” scored 772 points. Saudia Gibbs ended second runner-up with 724 points with “My Redeemer Lives.”

Elisabeth Courtar was declared winner of the 13 to 18 category. Her rendition of “Four Days Late” was good for 921 points. First runner-up Millenia Bennett captured 914 points with “Take me to the King” and Serginia Bryson’s “The Battle is Done,” was good for 865 points, making her clinch the position of second runner-up.

The judges for the event were head judge Benjamin Bell and Jeffrey Richardson, Mayanka Johnson, George Farrell and Lieneke Feenstra.

Suares and Elisabeth Courtar are both expected to represent St. Eustatius in the 2018 Inter Scholastic Idol Competition in St. Maarten.

Zdijah Romney was a guest performer during the event, during which Dennis “Big D” Lake was recognized for his contribution towards the Children Commission. Chairperson Cheryl van Putten said she is looking forward to “doing greater and bigger things” next year.